"In the Zone" (Portland Storm, Book 5) by Catherine Gayle 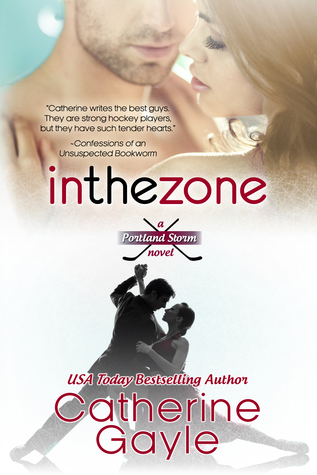 It was supposed to be a single night of fake names, half-truths, and anonymous sex. Neither of them was prepared for it to become more. Keith Burns, star defenseman for the NHL’s Portland Storm, was just looking for a way to pass the time and ease the loneliness of his lavish lifestyle. Brianna Hayden wanted to find herself—and maybe learn to love herself again—after health issues changed everything. Anonymity is the name of their game; the rules were laid down at the outset. But when a chance encounter brings them back together long after the game should have ended, all their initial rules get thrown out the window.
It isn’t long before partial truths and dancing around the pain of the past gets complicated. Their physical chemistry is off the charts, but it isn’t enough. They both want a future, but Keith has an unspeakable history involving his two brothers that he just can’t share with anyone, not even Brie. She needs the truth if they are going to have any chance at moving forward. If he can’t give it to her, it might land him a permanent spot in her penalty box. If Keith can get In the Zone, he’ll be on the forecheck—but Brie’s heart is the goal he’s seeking.

Catherine Gayle continues her record of delivering great romantic novels featuring heroes and heroines with underlying issues affecting their lives. In In the Zone, Ms. Gayle brings us a hero who lives daily with the guilt of bullying and a heroine who suffers from body-image issues brought on by an ex.  Keith and Brie meet in an anonymous hookup, on the East Coast, at a teammate's wedding. Who knew both of them would be in the same city on the west coast in a few short months later - Catherine did.  She expertly wrote a hero who's empathy for Brie's body-image issues come from a place deep inside - where he feels the guilt of his own bullying resulting in his brother's suicide.  Keith is wracked with guilt, believing that his relentless bullying of his ballroom-dancing brother led to his suicide and is punishing himself as a result. He sees most relationships in his life through these guilt-ridden lenses, and believe he isn't lovable as a result.  He finds himself in a unique position to relate to and help Brie with her body-image issues, brought on as a result of a medical condition and exacerbated by a cruel ex-boyfriend. But while he helps Brie with her issues, he continues to stew in his own guilt and is pushing Brie away in the process. She doesn't know what's driving Keith's emotional issues, but she knows she can't be with anyone who can't share himself with her.  As her confidence in herself grows, her knowledge that she can't be with Keith in his current state of mind force her to push him away.

Brie's body image issues stem from her gaining weight due to a health issue, and her ex-dancing partner who shamed her relentlessly for it.  Believing she was no longer suited for her career as a professional ballroom dancer, Brie was teaching ballroom dance lessons when Keith attended class with a teammate.  I've read many books where the hero and heroine meet, separate, and meet again and I think this was one of the best written reunion scenarios I've read.  Neither had enough information about the other to track them down, both had thought of the other on more than one occasion in the preceding months, and neither would have expected to find the other where the did!  The development of Brie's confidence throughout the book demonstrated how Keith's influence (and to a lesser extent, her new dancing partner's) helps her see herself in the way they see her.  I thought it was incredibly sensitive how Keith took specific steps to build Brie's confidence respectfully helped her emerge from the cocoon she had wrapped herself in as the butterfly he saw her.

I really enjoyed how the author developed Keith's relationship with his teammate Colesy (Cole Paxton).  Keith believed he went into that relationship due to his role as Assistant Captain, but deep-down, I know that Keith was relating to Colesy on a personal level and was going to ensure that Colesy didn't suffer the way his brother did with bullying.  It was a unique and refreshing addition to the story when the author brought Keith's brother Shane to town, and the relationship with Colesy and Shane was interesting - I'd be interested to see a stand-alone or spin-off series featuring Shane. The story line around Colesy and Shane was well written and enabled us to see a deeper side of Keith's personality, and his guilt with regards to his brother.

As Ms. Gayle continues her look into the players on the Portland Storm, she is using the nature of professional sports - with trades, retirements, injuries, etc - to introduce us to new characters, and reunite us with old ones as secondary characters in her books.  It was nice to "see" Razor on the other side of the puck, and nice to continue to stay in touch with Soupy, Zee, and the women in their lives as well. Ms. Gayle does a wonderful job of tying her books together through secondary storylines, teasers, and glimpses into the continuing lives of previous heroes and heroines and it makes this reader want to continue reading her books about the Portland Storm.

My reviews of other books by Catherine Gayle: