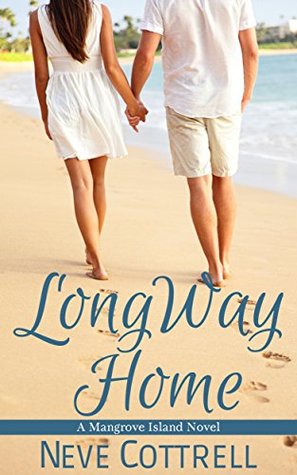 A second chance at love...

Tyler Barnes can’t believe his eyes when Alexis MacAdams walks back into his life. His high school crush left Mangrove Island seventeen years ago and never looked back. He’s held on to the memory of her, even though she never gave him a second glance. Now Alexis is back for the holidays and Tyler is determined to make a lasting impression before she slips away again. He soon learns, however, that her broken heart needs to heal before he has a chance to win it. Can Tyler convince her to risk her heart for a second time?

I found Long Way Home as a free book and thought I'd give this "new to me" author a try. And I'm really glad I did. This romance novel really touched me.  It was a "second chance at love.." novel, but not quite. Tyler's love for Alex has been unrequited for 17 years.  She felt no love for Tyler - she didn't even remember him.  I thought that was a really interesting twist on the "second chances" or "unrequited love" aspect of the story.

I hated Alex when the book first started - as a matter of fact, I had read about half of a chapter and set the book aside because I had trouble getting into the story. Typically, if I don't feel connected to the characters or the story almost immediately, I don't keep reading.  But, this book kept popping up on my free book feeds, and I continued to be intrigued by the synopsis, so I figured that I'd try again - and try to power through the point at which I had stopped before. I'm glad I did. Alex was a pretentious, snobby, hoity-toity beotch at the beginning of the story. I could literally see her turning her nose up in the first chapter of the book. I'm sure that's what the author intended, so I can say she accomplished it in spades. Alex's relationship with her family is clearly complicated and she spends most of the story working through those relationships. I really believe that Alex thought that in order for those relationships to heal, that her family would have to change and acknowledge her in a new way, when in reality, Alex was the one who changed as she returned home and analyzed her feelings, her experiences, and her perspectives.  I loved the Alex that emerged by the end of the book.

Tyler was a wonderful character. His own mother in the book summed it up well - he was in touch with his emotions and wasn't shy to express them. It was clear to everyone but Alex that Tyler had been nursing feelings for Alex since they were teenagers. He has held these feelings for all of these years, hoping that she would come back. But she never had - until now. Tyler decided quickly that he wasn't letting his second chance get away - and he doesn't. He is patient and kind. He is persistent and confident. He is funny and quirky and creative and wonderfully sensitive. I really enjoyed watching how Tyler understood what Alex needed and continued to make himself available to her as she worked through what she needed to work through.

I do have a couple of things that kept this book from being a 5 star / hit it out of the park read.  They are small, but enough that they warranted mentioning. I wish that we had met Tyler a bit before Alex walked into the bar. We had gotten to know Alex and a bit of her parents by that point, but it would have been helpful if we had had a scene or two to meet Tyler "in his native habitat", blissful to what is about to happen to him, before he and Alex were reunited. Perhaps even a prologue of Alex and Tyler as teens - even if they didn't interact - to set the stage. It just felt abrupt when we met Tyler. Also, There were a couple of scenes when Alex was interacting with members of her family and the point-of-view quickly shifted to the other person. It would only happen for a few sentences - when it was clear that the author wanted us to hear what the other person thought - but since the book was from Alex and Tyler's point of view, it was disruptive. It happened only 2 or 3 times but it made those sections a bit choppy.

Long Way Home is a great first book in the Mangrove Island series and I look forward to reading additional books in the series.

Note: As of this publishing, "Long Way Home" is free on all major ebook retailers.

Neve Cottrell is the author of contemporary romance novels.  Long Way Home is the first book in her series on the residents of Mangrove Island.  Neve began weaving tales as soon as she could talk, walking away with the coveted “Best Storyteller” award in preschool and she’s been writing ever since.  When she’s not crafting sexy heartthrobs and happily-ever-afters, she can be found indulging her need for reality TV and wistfully flipping through home and garden magazines.  Neve lives near the beach with her family.