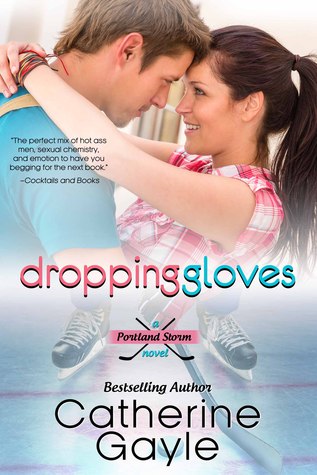 Katie Weber left her heart in Portland to chase a career in Hollywood. Now she has returned to sing the national anthem for the Portland Storm for their annual Hockey Fights Cancer night. Her longtime crush, Jamie Babcock, is hurting just as much as she is. One look in his eyes is all it takes to know that. She's done the Hollywood thing, though, and she's over it, but it might be too late to dig herself out of the hole she’s dug with him.
Jamie’s already done everything humanly possible to let go of Katie, but she keeps coming back, and she keeps crushing him all over again every time she leaves. His heart has been trampled on more than enough already. At some point, he has to draw the line. Doesn't he? Only, when it's Katie, he's not sure that's even possible. She's in Portland again right now, but he can’t be sure for how long.
Katie knows she has a fight on her hands, in more ways than one, if she’s going to convince Jamie she deserves another chance, but she’s willing to drop her gloves this time. Because in the game of love, all bets are off.

I fell in love with Babs all over again in Dropping Gloves.  Jamie (Babs) had decided that he needed a clean break from Katie or he would never move on with his life - while she was deciding that Jamie was her future. But their wires didn't stay crossed long, as circumstances - and Webs (Katie's dad) - conspired to ensure Jamie and Katie had a chance to explore their HEA.  Over and over in Dropping Gloves, Jamie says "I may not be perfect, but I'm perfect for you." But I think Jamie IS perfect.  We have watched him mature in each of the Portland Storm books and the man he has become really does seem perfect. His role as a teammate, brother, son, friend, and boyfriend shows the depths of his personality and maturity.  But, make no mistake - he still can't cook anything that doesn't involve a toaster oven or a microwave - but we love him all the more for it. Jamie is perfect - and he's perfect for Katie.

I hurt for Katie in this book.  I loved the innocent young girl that Jamie fell in love with; that suffered through cancer and went to prom with no hair; and that headed to Hollywood to follow her dreams. She didn't come back an innocent girl - and I hurt for her. She was put in circumstances at the hands of her agent that tested her resolve and her fortitude and she didn't always make the best of decisions.  But the best decision she's ever made was deciding to come home to Portland, her family, and Jamie. Katie's pain felt REAL as she described her life in Hollywood to Jamie and I could FEEL Jamie's anger and pain and hurt in reliving those experiences with Katie.

In this book, you also meet Blackbeard (aka Spanky, Tiger).  Catherine Gayle wrote the scenes with Blackbeard in such a way that I could literally see him sitting on Babs shoulder!

It's difficult to write a review of Dropping Gloves without giving away so many of the complex intricacies of the story, so I'll just say that Catherine Gayle has another hit with Dropping Gloves and has delivered the love story that we have been wanting for Jamie and Katie since Breakaway.


My reviews of other books by Catherine Gayle:
Author Bio: