"Romancing the Earl" by Darcy Burke 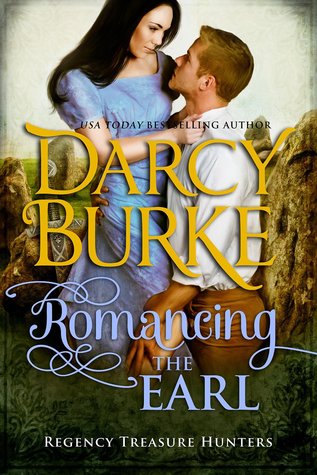 Major Elijah Hollister never wanted to be an earl, particularly not when it meant losing his brother. When a bold adventuress shows up at his door seeking a treasure map, Elijah suspects his brother’s death may not have been accidental and that the lady knows more than she’s willing to share. Whether she’s a friend or foe, Elijah plans to keep her close—and hope the temptation of her kisses doesn’t ruin them both.

Miss Catriona Bowen can almost taste the fruits of her years-long quest to find one of Britain’s greatest treasures. The discovery will deliver the recognition and respect she deserves as an antiquary, despite the fact that she’s a woman. However, to find the map that will lead her to success, she must ally herself with a stoic, yet provocative gentleman with a different goal. And when a villain threatens their lives, she realizes too late that love is the greatest treasure of all.


Romancing the Earl is the second book in the Regency Treasure Hunters series and features Cate, the daughter of Rhys and Margery, although they aren't prominently featured in the book. I find I'm really learning a lot about how life during the time period featured and that's really interesting to me. I personally understand very little about nobility and propriety during those times and these books give a great glimpse into that.

I like that the romantic aspects of this story revolve around two people who don't intend to marry - neither of them do. Many of their decisions around personal interactions are influenced by these feelings; and both Cate and Elijah alternatively reach for each other, and push each other away, due to their feelings about marriage. It influences Cate's decision to flout propriety in favor of her dreams, and it influences Elijah's decisions regarding his alternating feelings for Cate. This couple definitely goes back and forth with regards to dealing with the feelings they didn't know they had and it made for an interesting dynamic throughout the story.

I have read many romance novels with varying levels of sexual intimacy included. I found the way that the author includes the intimacy in this book truly enhances the book.  Due to the politics regarding female behavior and propriety of the time, a woman of society was expected to remain pure until her marriage, so the introduction of sexual tension and sexual chemistry takes on a new meaning when the implications of sex have such far reaching impacts. These aspects are woven seamlessly into the story and really enhances the overall story as it progresses.

I also really enjoyed the mystery aspects of Romancing the Earl. The way in which this mystery implies the author intends future books to find more treasures, and this reader is looking forward to future mysteries about the Authurian treasures. I feel the intrigue aspects of the story were secondary to the true mystery of analyzing the clues and identifying the location of the treasure Cate sought, and the author draw in the reader just as Cate drew Elijah in to the excitement of the mystery and the search for the treasure. And while Cate and Elijah are searching for the treasure, and the men responsible for Elijah's brother's death, they didn't realize what they would also find is their love for each other.