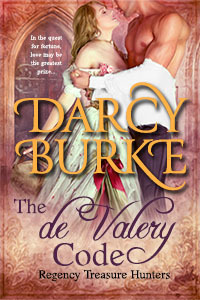 Miss Margery Derrington and her dear aunts are in dire straits. Their discovery of a rare medieval manuscript will hopefully stave off their creditors—if it’s worth what they hope. Margery reluctantly allies with a reclusive scholar to use the book to pursue a treasure that could exceed her expectations. Amidst danger, secrets, and an insatiable attraction, is Margery gambling just her financial future...or her heart?
Academic Rhys Bowen can’t believe he has his hands on the elusive de Valery text. Solving its hidden code and unearthing its legendary treasure would establish him as one of Britain’s leading antiquarians, finally casting him out of his brilliant late father’s shadow. But when a centuries-old organization convinces Rhys of the perils of disturbing the past, he must choose between his conscience…and the captivating woman he’s sworn to help.

As my first entree into this genre (and take everything I say with the understanding that I have ZERO frame of reference), I enjoyed reading this novel.  The author captured my interest quickly with the introduction of a mysterious book, a young woman in dire straits, and then, a young handsome man who finds himself in the enviable position of becoming her hero.  As I was reading through the first chapters of this book, I found myself drawing parallels to how this story would be told in a Contemporary Romance framework, my "comfort zone", That transition helped me to become engrossed with the story and follow along with it in its own context.

As I previously mentioned, I have no frame of reference to compare the story line in this book with others of similar genre, but the writing style was compelling and drew me in. The dialog was tight, and the "mental dialog" was pertinent without being overbearing. Once I adapted to the language patterns and word usage of the time, I found the story flowing smoothly and I was captivated with the suspenseful aspects of the story, as well as the romance.  I knew not what to expect with regards to intimacy between the characters, but similar to the author's Contemporary Romance books, she did not disappoint.

I enjoyed the character development of Margery and Rhys (or should I call them Miss Derrington and Mr. Bowen).  I felt the struggles that each of them experienced as they were trying to determine whether it was worth the risk to explore their feelings.  Each had experienced loss in their life and felt love wasn't worth the risk of further hurt. Ultimately, the realization that experiencing love was worth the risk won out over fear of loss.