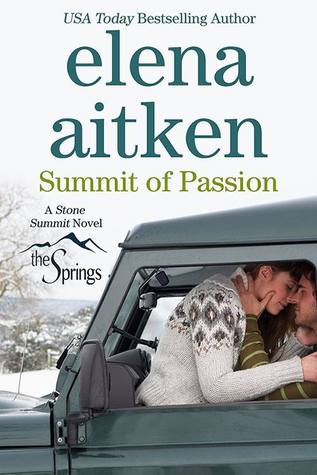 When Deanna Gordon left Marcus Stone behind to pursue her dreams, she not only broke his heart, but hers. Now she needs his help but it will come with a price.
The only thing Marcus needs in his life, is to get back on the professional snowboarding circuit, and he’ll be able to do that, if he buys into Deanna’s crazy plan. A plan that could cost him a whole lot more than he’s willing to risk.
After all these years, their attraction is stronger than ever, and as much as she tries to pretend it isn’t real, the love between them never really died and now Deanna must decide whether she can leave Marcus again—for good—or whether a second chance at love is worth everything she’s spent her whole life working toward.
Like all my books, Summit of Passion can be read and enjoyed as a stand alone novel, but are even more enjoyable when you read them as a series. Catch up with your favorite characters with the rest of the books!

Summit of Passion gives the reader the opportunity to come back to Cedar Springs, check in with some of your favorite residents, and dig into the story that the author teases you with at the end of Summit of Seduction. In Summit of Passion, we finally get to understand Marcus and what makes him tick, and that is apparently Deanna. What I liked about this book that I don't often see in other connected books is how interrelated this story was with other stories, and characters, in the Stone Summit series. You get to see the dynamic of Deanna's relationship with Kylie, who found her happily ever after in Second Glances and Summit of Desire, as Kylie observes Deanna's developing relationship with Marcus. Kylie realizes Deanna's role in the breakdown of her previous relationship with Marcus. The feelings leap off the page as we observed Kylie and Deanna hash out their circumstances. You also get to see more of the twin dynamic, since Marcus's twin, Malcolm, is the one now with Kylie. So many interrelated relationships leads to tension as Marcus and Deanna are navigating their relationship.

There were other parts of this story that just didn't sit right with me. Deanna is a doctor and she acts completely unprofessional in her dealings with Marcus in a professional capacity, and frankly, she acts extremely immature for a 30-year old. She strikes a deal with Marcus, inappropriately leveraging her professional relationship with him, rather than having an honest conversation with her parents about what she wants out of life. And the ethics issues just didn't sit right with me and tainted the remainder of the book for me.

I also felt this book was rushed. It was a quick read - I read it in an afternoon - but I felt like there was so much more that could have been added into the story to give it more depth and richness. The couple in question basically have two "staged" dates, each involving sex, the hero leaves, the heroine cries, the hero comes back, hero and heroine reconcile and all is happy. I just felt the author left so much on the table that could have been developed to a deeper level than it was.

My misgivings aside, the book was still well written, the dialog was enticing, and the sex scenes were steamy. I won't let my discomfort with this book turn me away from future Elena Aitken books.