"Love in a Snow Storm" (Pine Harbour) by Zoe York 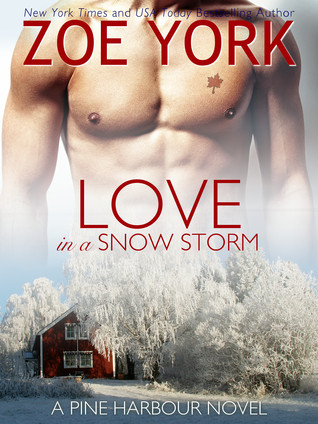 Synopsis:
Never fall in love with your best friend's little sister...
Contractor and army reservist Jake Foster fell in love with Dani Minelli when she was a colt-legged high school senior. He knew he was too old to even look at her, let alone touch.
Dani’s been trying to get his attention since returning to Pine Harbour a grown woman—and failing miserably at every turn.
This winter, everything is going to change. And when the snow stops falling, Jake and Dani won't be able to hide from their attraction any longer.

I loved the second book in the Pine Harbour series, Love in a Snow Storm. The heroine and hero, Dani and Jake have, ironically, what I consider a mature love. Ironic because what has held them back all these years was Dani's young age. You see them fighting what they feel for each other at the beginning of the book, which reflects what they have both been going through for years, fighting their feelings for each other. While they are struggling with what they feel for the other, neither knows the other also has feelings.

I think I was most struck by how they handled their first major fight. Jake leaves his house after thehy fight - albeit not without a comment about how he couldn't stay where he could smell her. He barely gets down the street before he realizes that's not the right way to handle the fight, and heads back home. Dani knows she can't just storm out after they fight, so she hunkers down until Jake returns to discuss what their issues are. So, each of them maturely realizes that for this to work, they have to stay and fight for it, even if it means fighting for each other. That's much more mature than I often see in couples who are older and have been together longer.

I even liked how the author handles even the potential wrinkle in Dani and Jake's relationship, which I won't disclose here. Dani and Jake keep the lines of communication open, appear to discuss what they are feeling openly, and keep no secrets between themselves or others (except of course, the fact that they are dating and in love).

In the Pine Harbour series, the author really creates a town where I feel like I know the residents. I would love to date a Foster or a Minelli man. She has created a group of strong, alpha men who live and love fully and show amazing sensitivity to the women in their lives, even when they are being a bit boorish.

And I love how the author gives us a teaser about the next great relationship in Pine Harbor at the very end of the book - makes me want to head back to Pine Harbor as soon as possible!