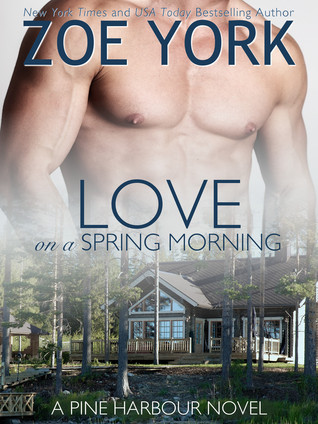 Synopsis:
Duplicity. Desire. Denial. They were doomed from the start.
Ryan Howard has zero interest in the movie being filmed in Pine Harbour or the high maintenance stars staying in the cottages at the end of his lane. He's just barely holding on to the raw remains of his life and the fantasy world being concocted around him is, as far as he's concerned, a complete waste of time and energy. The one bright light in his life is an intern on the set, Holly Cresinski, and their quiet conversations at the end of the day on his back porch.
Holly hates her life, too, which is entirely unfair because she’s blessed beyond measure. She’s at the top of her career--as film actress, Hope Creswell--and surrounded by people that mean well. But Ryan makes her laugh, and cry, and before she can find the words to explain her deception, he kisses her.

My Review:
I wasn't sure what to expect when I picked up this book - I was excited to read it after enjoying the first two books in Pine Harbor. Enjoy doesn't begin to explain the emotions I feel upon finishing this book. Any reader who read Love in a Small Town or Love in a Snow Storm knows that Ryan lost his wife and is raising his kids alone; so you expect some level of grief as part of the story. I was blown away with the way in which the author depicts Ryan mourning the loss of his wife. I've read several stories recently depicting widowers but this was an unbelievably raw look at moving forward after the loss of a spouse. Ryan's commitment to his children is inspiring and he has upended his life to help them transition to life without their mother. Ryan can experience the entire spectrum of grief feelings in a single moment, yet his feelings of guilt run deep. His guilt transcends his wife's death, as his guilt goes back to guilt in how he dealt with her when she was alive, and feelings of inadequacy even prior to her death. Ryan may be grieving and gruff with just about anyone he interacts with, but I don't believe he's wallowing and he works every day to try and move forward and raise his kids. In typical "alpha male" form, he doesn't WANT to discuss his feelings but realizes how important it is to help he and his children move forward.

Holly is a complex character and is not depicted as a typical Hollywood personality, although that's what those who know her on the surface believe, including Ryan. It's only natural that when she's given an opportunity to shed the Hollywood persona that she does, and it sets the stage for a great conflict between her and Ryan. I felt her fears about revealing her true - or surface - self to Ryan were real and Ryan's reactions when he finds out were real, and raw. The author really nailed the depiction of Ryan's anger and frustration and anxiety around Holly's real (or is it her fake) persona and when things get worse, I also felt the author's portrayal of Ryan's reaction was incredibly realistic. Ryan is quick to anger but almost a quick to forgive and apologize, which I felt was a realistic depiction of a man coming out of the fog of grief. I found myself crying right along with Holly and Ryan through much of this book - both happy tears and sad tears. That is the sign of a truely emotional book if the author can get the reader to feel emotions aloong with the characters and Ms. York does that in spades.

The sex scenes in this book are really quite descriptive, perhaps moreso than previous books in the Pine Harbor series, but I felt that they were critical to the development of the storyline and Ryan's emerging from grief and beginning to live again. As a whole, this book does an amazing job of depicting a man struggling to raise his children amidst the grief and guilt of losing his wife, and a woman who is trying to figure out who she is and where she really fits in her own life and together they each help the other come out of the other end of their journey.