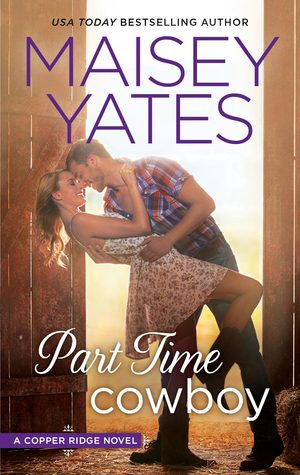 Sadie Miller isn't expecting any welcome-home parades on her return to Copper Ridge. Least of all from part-time rancher, full-time lawman Eli Garrett. The straight-laced, impossibly hot deputy sheriff glares at her like she's the same teenage hoodlum who fled town ten years ago. But running from her demons has brought Sadie full circle, ready to make a commitment at last. Not to a man, but to a B and B. On Garrett land. Okay, so her plan has a tiny flaw…

Eli works too hard to let a blonde ball of trouble mess up his town. But keeping an eye on Sadie makes it tough to keep his hands off her. And if she's so wrong for him, why does being with her feel so right?

What a wonderful introduction to Copper Ridge, Oregon we find with Part-Time Cowboy from Maisey Yates. The author creates a quaint little town that is holding its own as a new generation of folks are coming of age. Eli and Sadie are two of those - both having grown up in Copper Ridge but taking different paths to where they find themselves. Sadie has spent her life running - the author wonderfully depicts her as someone afraid to make connections, and ultimately to love, because for her love means pain. She has become a therapist but never found herself rooted, choosing to continue to move around and create an isolated existence for herself.


"This was why she always left. Because if she left first, if she never let anyone close, if she never asked anyone to know her and accept her anyway, she couldn't get hurt."

Sadie is a wonderful character who seem to be able to do whatever she sets her mind to - and she has decided to come home and open a Bed and Breakfast. Nothing deters her as she makes her plans and moves forward with steps to open her B&B - expect Eli.

In Eli, the author nails "strong, silent type" to a tee. Eli grew up feeling out of control so now he needs to control everything in his life, he needs things neat and orderly, so he never has to feel the way he did growing up with his parents. Being a deputy sheriff is a perfect role for him - its a job driven by rules. As long as Eli knows the rules and can follow the rules, and punish others that don't, he's happy. There are so many other things out of control in his life, including his brother Connor who is in a state of perpetual mourning. We get to know Connor in this book but Connor's book, Brokedown Cowboy, really digs into what's going on with Connor. Eli feels the need to take care of everything - Connor, his sister Kate, Sadie's B&B, Sadie's barbeque, and ultimately the entire town. But as much as he tries, Sadie turns his well-ordered life on its ear. I loved how the author turns Eli's overall frustration with his inability to control what is going on around him into sexual frustration, directed at Sadie. I'm not sure how much of the beginning of their relationship was more than anger and frustration - strong emotions - that erupt into sexual need. But what started out at sexual need for both of them ends up being so much more.

I'm not sure I've read a book recently where two people are both so determined not to want to feel the way they feel.  Both Sadie and Eli fight their feelings as soon as they meet, and as soon as they act on those feelings, they BOTH constantly fight what they were feeling.  Until the very end, neither is willing to admit what they have is more than casual sex, because neither one can give up the control that they have needed to protect themselves.


"But I realized something today, when I was ready to leave this place, to leave you. I realized it's not enough to have a life. You have to have all of life. And I haven't let myself do that."

Sadie's realization above epitomizes both Sadie and Eli. It's why they are so perfect for each other. Eli provides Sadie with the comfort and reassurance that she is safe, and Sadie shows Eli that being out of control isn't always a bad thing! In Part-time Cowboy, the author welcomes us to Copper Ridge and the Garrets, introduces us to two wonderfully-complex characters in Eli and Sadie who are so perfectly suited for each other, and makes us crave another visit to Copper Ridge where we can get to know Connor, Kate, and others in Copper Ridge. 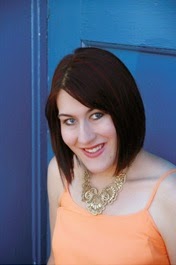 USA Today Bestselling author Maisey Yates lives in rural Oregon with her three children and her husband, whose chiseled jaw and arresting features continue to make her swoon. She feels the epic trek she takes several times a day from her office to her coffee maker is a true example of her pioneer spirit.

In 2009, at the age of twenty-three Maisey sold her first book. Since then it’s been a whirlwind of sexy alpha males and happily ever afters, and she wouldn’t have it any other way. Maisey divides her writing time between dark, passionate category romances  set just about everywhere on earth and light sexy contemporary romances set practically in her back yard. She believes that she clearly has the best job in the world.