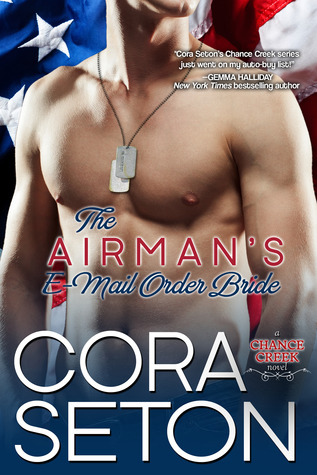 Synopsis:
Tormented by the knowledge that his father died thinking the worst of him, Colt Hall never meant to come home to Chance Creek. But with his brothers banding together to rebuild the family’s old ranch, he’s finding it hard to stay away. In accordance with the conditions for them to inherit the spread, Colt must soon marry. Too bad the only woman he wants is Heather Ward, the girl he walked away from years ago without saying good-bye.

Heather hid a secret for twelve long years, but when the Halls moved back to town it was only a matter of time before the truth came out. Now everyone but Colt knows he has a son. She’ll get one chance to convince Colt to forgive her—and become the father Richard has always longed for. If she answers Colt’s online ad for a temporary wife, will he fall in love with her before he learns the truth?

Colt knows it’s crazy to try to find a wife through an internet ad, and it’s even crazier to fall for a stranger who wants far more than a temporary marriage, but Helena Warner reminds him so much of Heather, he begins to wonder if the two might be the same woman. Heather can’t believe she’s using a fake name to seduce the father of her own child, but is it possible Colt might know more about her true identity than he’s letting on?

Once all the lies and secrets are stripped bare, Colt and Heather must answer the ultimate question: can a love interrupted ever be renewed?

My Review:
The Airman's E-Email Order Bride is a fun twist on the E-mail order bride series. Heather knows that Colt, her former love, was going to post his ad for a "mail order bride" and was waiting to respond. But, afraid of his response to the girl he associates with his father's death, she responds with a false name. It was fun to watch as Colt figures out who he's emailing and how Heather and Colt go back and forth before they realize that both know who the other one is. The sex scenes were pretty hot, especially since they start as sexting / online sex.

I was happy to see that they quickly make the decision to move forward together, and then gasped as those plans were almost as quickly derailed.  Although Heather has been keeping the fact of Colt's son from him, I like that his declarations of love for Heather, and his proposal, come prior to his knowledge about his son. It demonstrates that his feelings are REAL and truly about her, and not just a sense of obligation or a desire to get to know Richard.

I completely did NOT see the twist in this story coming, and wanted to hate Melanie for being such a spoiler. And I DID hate Heloise right along with every other character in the book for how hateful she was being. The charade did reach the level of preposterous and I was thrilled when finally Colt reacted to Heather's feelings and did what was right. I really didn't like how Richard was roped into the deception, regardless of how complicated they all claimed it was - that was a bad example to set for him.

I again love how the obstacle course is worked into the story - the obstacle course has almost been its own character in this series as it's played such an important role for the Hall family. Thankfully, in the end, two first loves are able to find their way back to each other and I was thrilled with the ultimate outcome of the initial conditions of the inheritance. I am sad to see the conclusion of this story arc around the conditions around the inheritance of the Hall family farm, but so happy I got to know the Hall men, and their true loves, through this series.

Cora Seton loves cowboys, country life, gardening, bike-riding, and lazing around with a good book. Mother of four, wife to a computer programmer/eco-farmer, she ditched her California lifestyle eight years ago and moved to a remote logging town in northwestern British Columbia. Like the characters in her novels, Cora enjoys old-fashioned pursuits and modern technology, spending mornings transforming a one-acre lot into a paradise of orchards, berry bushes and market gardens, and afternoons writing the latest Chance Creek romance novel on her iPad mini.

Website: Visit www.coraseton.com to read about new releases, locate your favorite characters on the Chance Creek map, and learn about contests and other cool events!
Posted by Nancy at 5:00 AM