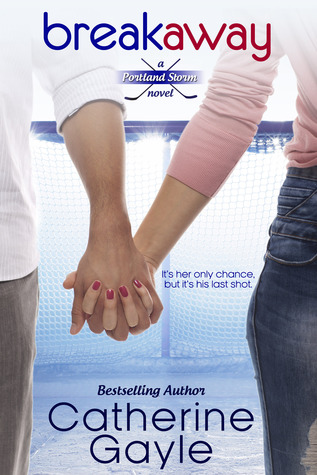 She’s reaching for a breakaway pass.Dana Campbell has spent the past seven years in self-imposed isolation for a crime she didn’t commit. The danger is well in the past, but her panic attacks make it impossible to have a normal, healthy relationship with a man. Even her counselor has given up on her. She has to find someone she trusts to help her fight through the panic, or her seven-year ordeal will become a lifetime sentence. There’s only one man she feels safe enough to ask.He got caught with his head down.As the captain of the NHL’s once elite but now fading Portland Storm, Eric Zellinger knows a thing or two about keeping his focus on the job. Questions are flying about his ability to lead the team back to the playoffs. If they don’t make it, he might be shipped out of town. It’s the worst time possible for his best friend’s kid sister to divide his focus. How can he give her what she needs without jeopardizing both the Storm’s playoff hopes and his future with the team?It’s her only chance, but it’s his last shot.

I'm not even sure what I can say about "Breakaway" by Catherine Gayle. I've read thousands of romance books but I can't remember the last time a book touched me in the way this book did.
When I first started reading, I had trouble picturing Dana in my head - I can usually visualize a character pretty quickly. But, it didn't take long before I had an image of a strong, but broken girl, who wanted to find a way to start the rest of her life. My heart broke for Dana throughout the book and I found myself crying along with her many times. I think she was stronger than she gave herself credit for many times, and I was pleased to see her strength and self-confidence grow throughout the book.

Eric had a heart of gold. You wouldn't expect a professional athlete - especially a hockey player - to have such a sensitive and insightful side to him. An athlete in a sport where there are players whose primary focus is to fight their opponents on the ice, we see a man who is tough on the ice, and strong with an incredible gentleness in his relationship with Dana. He was the perfect man for her to turn to, even without knowing what he had been keeping from her for years.

The conflicts in this storyline were great and Eric and Dana were fighting against the forces that would keep them apart for most of the story. Dana's struggles overshadowed the fact that neither was communicating their real thoughts and feelings.
I don't know much about ice hockey, and there were a couple of times when specifics about the game were woven into the story. I was a bit confused at those times, but it didn't bog me down and take away from the over-arching storyline. I had to fight myself to turn to the end to make sure they got their happily ever after, so I was reading quickly because I wanted to really absorb the story, but at the same time, I wanted to get to their happy ending.

I also love it when an author introduces other characters and gives you just enough about them to make you want to read their story - I look forward to Soupy and Babs' stories!

This was my first read by Catherine Gayle, but it won't be my last.