"A Baby of Her Own" by Brenda Novak 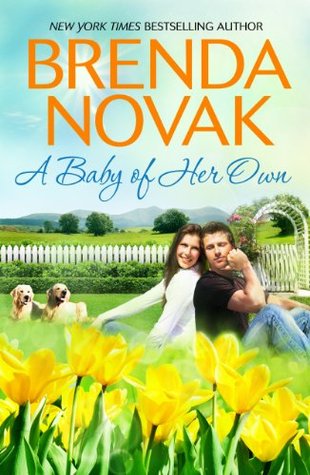 What Delaney wants... ...is a baby.A baby of her own. At thirty, she longs to break away from the constraints of her life. Longs to reach out for her heart's desire. She'd prefer marriage as well, but there's no man in Dundee, Idaho, she's interested in marrying.Then one winter night she and her best friend, Rebecca, go to Boise with the intent of finding a man for Delaney. She meets a handsome stranger named Conner, a man who might be able to provide her with the solution she needs...and the baby she wants!Afterward she thinks she must have been out of her mind. But it's too late. Because she's pregnant. And because the stranger isn't a stranger anymore. Conner Armstrong is now living on a ranch just outside Dundee.

This is not my first time reading the Dundee, Idaho series from Brenda Novak.  I was looking for some easy reads that I knew had a HEA from an author I knew I liked.  Brenda Novak never disappoints in that regard.

A Baby of Her Own is a story of two people (Connor and Delaney) who are both feeling that they have no where to belong, and are fighting with everything they can to find that place, that family. Delaney has decided that a baby will give her someone guaranteed to love her; Connor believes he can prove himself to his uncles and grandfather with turning the ranch around. The author gives us a glimpse, with Delaney, into what it was like to feel like she didn't belong anywhere, and as a result, she felt obligated to support everyone in her town because they took her in. In Connor, we see how deeply he has been affected by his, and his mother's roles, in their family, and the abuse under which he has suffered since he was a child.The author makes it easy for us to want to root for both of them, and then turns Connor into someone we don't know when he realizes what Delaney has done. As his relationship with Delaney progresses, we see his feelings transition from anger to fear, and that fear continues long past the time Delaney's feelings have turned to love. It takes the fear of losing Delaney for Connor to get his head out of his, ahem, well, you know, and decide it was important for him to express his feelings, regardless of his fear of rejection and loss.We also got a glimpse into the lives of several of the other residents of Dundee, such as Rebecca and Katie, and look I forward to digging deeper into their lives in subsequent books!

Email ThisBlogThis!Share to TwitterShare to FacebookShare to Pinterest
Labels: 4 stars, Baby of Her Own, Brenda Novak, Dundee