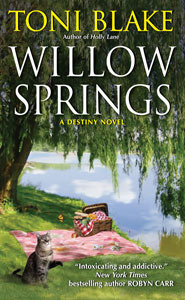 Amy Bright might be the best matchmaker in Destiny, Ohio, but she's desperately shy when it comes to her own love life—and helpless when it comes to Logan Whitaker, the best friend whom she's head-over-heels in love with. So Amy decides to become Logan's secret admirer, sending him sensual love letters steamy enough to unseal their own envelopes. One letter leads to another, one thing leads to another, and then comes an unplanned kiss…
Overcoming a tragedy from his life as a firefighter, Logan needs a friend. Thank goodness for Amy. But when a woman from Logan's past resurfaces right as some anonymous letters send Logan's pulse hammering, suddenly he doesn't know what he needs—a reliable friend, or a passionate lover? One smoking-hot kiss could change everything…but will it ruin a one-of-a-kind friendship, or show Logan and Amy that they've already found everything they need, right here in Destiny?

While Toni Blake continued to create characters with a lot of depth that are easy to relate to, I didn't enjoy this read as much as her previous Destiny books. Its difficult to discuss the aspects of the story I disliked without providing spoilers.Friends becoming Lovers is always a fun storyline but I disliked that Amy wasn't strong / mature enough to do more than "write notes from a secret admirer". This seems very childish and immature for a 30+ year adult. And I hated that it took her most of the book to realize she was a "doormat" because she was. No one should continue to put herself out there for someone who can't decide what they want from day to day. And Logan was right when he accused her of meddling in others lives. His insight that she thought her ideas were the right ideas for other people was something she needed to be told. So, I basically didn't like Amy as a character in this relationship at all.And ultimately, I disliked the newcomer to Destiny. Her ongoing disdain for everyone in town, and her complete lack of empathy, understanding, or even awareness of others' feelings about the situation just made her shallow and narcissistic. She came to town as a confident woman, despite her past, yet her attitude was snobby towards everyone who wanted to forge a relationship with her. I almost wish she had gone home to Indy.All in all, a good read but not a great read. I had a harder time relating to the characters in this story because I felt that neither of the principal characters acted as though they were adults, which made the storyline feel very juvenile. I continued to enjoy catching up with Mike and Rachel and wish there had been a bit more of Lucky in this story. Mike has emerged in this series as the "patriarch" of the majority of the Destiny books and while a strong character, he can be a bit overbearing and that can dominate the story at times.