"A Home of Her Own" by Brenda Novak 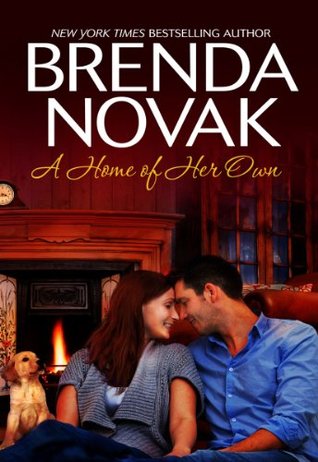 When Lucky Caldwell was ten, her mother, Red - the best-known hooker in Dundee, Idaho - married Morris Caldwell, a wealthy and much older man. It didn't last, of course, but Morris's kindness was the highlight of Lucky's life.
Mike Hill, Morris's grandson, doesn't feel too well-disposed toward Red or her kids. He believes they alienated Morris from his family. Even Morris's Victorian mansion, on the property next to the Hill ranch, wasn't inherited by one of his grandchildren. Instead the house went to Lucky, who left it sitting empty for years.

Now that Red and Morris are both dead, Lucky has finally come back to Dundee. She plans to restore the derelict place - and to look for her real father, who has to be one of three men named in her mother's diary.

That means Mike has a new neighbor.

In "A Home of Her Own", we see a girl who can't live down her mother's past. And her mother's sins have become her sins: in her own mind, and in the mind of the residents of Dundee. No one is welcoming to her, except Mike Hill. I was thrilled to see how he was quickly to see through her tough façade to realize that below her tough exterior was a fragile girl who was desperate for acceptance. She wasn't accepted by her own family, including her own mother and mostly her brothers, and she wasn't accepted by her hometown. I was at first put off by the age difference between Mike and Lucky but quickly saw that Mike's maturity is exactly what Lucky needed. I kept hoping that Mike would come to his senses and stand up for Lucky publicly sooner than he did. Family pressures kept pushing on Mike from one direction, and his growing feelings for Lucky pushing on him from another direction - its no wonder he about exploded.

I was quite surprised at the hostility that Mike's mother continued to hold towards Lucky and that she couldn't see that she was foisting the sins of mother down on the daughter. And I was eventually disappointed in Mike in his continued acceptance of that behavior - he created a situation that allowed everyone to continue their shunning of Lucky.In the end, I thought Brenda did a wonderful job of their happily ever after - I loved their communication at the end, and the Realtor was a hoot!!All in all, another great story from Dundee, Idaho and I like how Brenda has begun to introduce other characters that we'll hear about their stories in future books!

Email ThisBlogThis!Share to TwitterShare to FacebookShare to Pinterest
Labels: 4 stars, Brenda Novak, Dundee, Home of Her Own