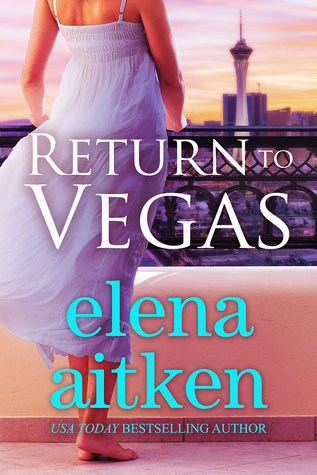 Five years after being reunited in Las Vegas, Lexi and Leo have settled into domestic bliss.

Lexi would never dream of keeping anything from Leo, but she has a secret that’s too painful to share even with the man she loves. When that secret threatens to come between them, will Lexi be able to share her devastating truth, or will she bear the pain alone?

Leo would do anything for his family, including leaving his career behind and moving to the remote Canadian Rockies. When he’s presented with an offer that’s too good to be true, he can’t turn it down. Even when it means deceiving those he loves the most.

While Lexi and Leo discovered that Nothing Stays in Vegas, the only thing that can bring their love back together again, is a…Return to Vegas.

It has been several years since I read Elena Aitken's Nothing Stays in Vegas and was excited to know she was releasing a follow-up. I took the opportunity to re-read the original and I enjoyed it this time around as much as last. It had twists and turns, drama and heartbreak, and love.

In Return to Vegas, we catch up with Leo and Lexi five years after Nothing Stays in Vegas. Leo and Lexi have made a good life for themselves. But as with any couple, they have their struggles. The author does a good job of depicting some typical struggles a couple may have after getting comfortable in their relationship. They've lived through some heartbreak and some struggles but have remained strong as a couple - or so they thought.

I love how the author demonstrated the struggles each of them had as they withheld information from their partner, each for their own good reasons, but the emotional struggles they work through while trying to navigate the situations they find themselves in was realistic and heartwrenching. I thought the way Leo and Lexi got their ultimate happily-ever-after was perfectly done and a good example of how a couple can work through struggles and come out the other end stronger for it.

All in all, a great read and really nice to catch up with Lexi and Leo.