Review: "Love on a Summer Night" by Zoe York 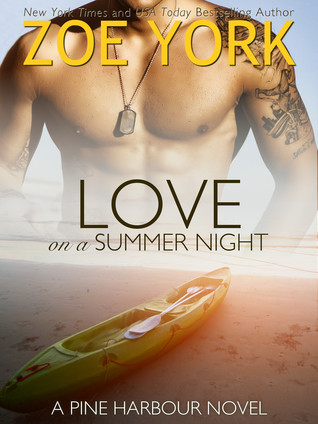 Zander Minelli has six months left in his Army career, and then he's coming home to Pine Harbour for good. But first he needs to figure out what he's going to do with the rest of his life--after he spends a good long while kicking back and enjoying his freedom.

Widowed single mother Faith Davidson is ready to start dating again. But only someone solid, with a job and a pension and absolutely no tattoos. Definitely not someone who's only in town for a week, whose extended life plans include riding his motorcycle across the country and sleeping until noon.

Love on a Summer Night is Zander's much anticipated story and the author doesn't disappoint. I wasn't sure what to expect from Zander when we were teased with him previously, but he's not what you'd expect from a leather-clad motorcycle-riding soldier. And that's what Faith discovers quickly as well. She forms an early opinion of him and spends the rest of the story trying to reconcile her heart and her mind regarding Zander.

Zander is just, well, I'm not sure how to describe Zander except to say "I want me one". He's an alpha hero but extremely sensitive, patient, and understanding. He's incredibly sexy and confident and knows what he wants and makes no bones about it. But he understands where Faith is coming from with her perceptions and ideas of love and relationships and is patient with her, but makes his intentions known. He's great with Faith's son and sensitive to not usurping Faith's relationship with her son as his develops.

Love on a Summer Night is well written and well paced. The relationship between Zander and Faith is well developed and very realistic and the intimacy scenes are well written and very sexy. A great addition to the Pine Harbour series. You don't need to have read the previous books in order to enjoy Love on a Summer Night, but you'll want to read them because they are all equally fantastic.