Release Day Review: "The Idea of You" by Darcy Burke 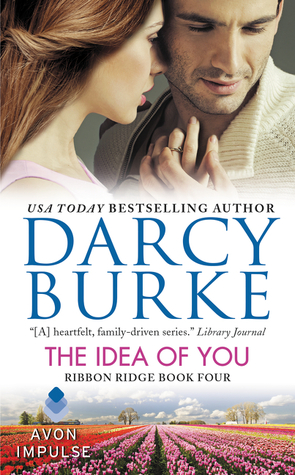 Evan Archer has always preferred peace and solitude to the loud antics of his large, hard-to-navigate family. But when Archer Enterprises needs a new creative director, Evan jumps at the chance to claim the job he’s always wanted. Moving home is easier than he expected, but Evan isn’t prepared for the stunning A-list celebrity hiding out in his family’s garage apartment.

Following a major tabloid scandal, movie star Alaina Pierce escapes to Ribbon Ridge. She’s immediately drawn to the quiet, picturesque town and the incredibly sexy—if a little quirky—Evan. He may be built like a Greek god, but he’s honest and straightforward… so different from the Hollywood types she normally dates.


Their attraction is undeniable, but Alaina can’t elude the paparazzi forever, and Evan has no interest in being in the limelight. When the secret she’s been keeping is exposed, the idea of Evan—of real love and a family like the Archers—could vanish in an instant.

I've loved the books in the Ribbon Ridge series and The Idea of You didn't disappoint. It's the story of Evan Archer, one of the more elusive siblings. In each book, we've seen that many of the Archer children has socially-related struggles and the same is true for Evan. He suffers from Asperger's Syndrome, albeit milder than some I've known. The author does a great job of depicting Evan's Asperger's, including his inability to read social cues and his struggles with large groups and loud noises. I really thought it was well done because Even was very straight forward with Alaina about things that she could otherwise misinterpret. It took them a while to navigate how to make a relationship work and the struggles make Evan endearing to the reader.

I thought Alaina was incredibly grounded for a Hollywood starlet and I appreciated how down-to-earth she was. Even the "Hollywood" aspects of the storyline, to her, were just run of the mill. She didn't come to Ribbon Ridge looking for a relationship but I love how it found her when she was least looking for it.

I found this book very realistic. Evan's perceptions and understandings about his family were very realistic, as were his struggles with Asperger's. Alaina's desires for the future and her "go get em" attitude to meet her goals was relatable. We also were given the chance to check in with our favorite Archer couples!