Review: "Fighting for Forever" (part of Love Ever After box set) by Elena Aitken 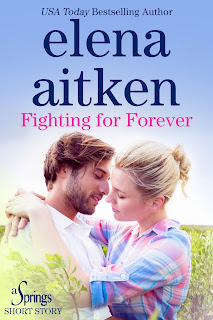 Synopsis:
Ever since falling in love at The Springs, Rhys and Kari have been living a fairy tale, but fairy tales aren't real. Or are they? When Kari runs from the idea of forever, Rhys will have to fight for them. But will it be enough?

"With the right person, marriage isn’t a life sentence. It’s a life."

Fighting for Forever is a follow-up short story to Falling Into Forever. It gives us a short catch up with Rhys and Kari. When we last saw them, they were living happily together. Kari had jettisoned her ex-husband and was living happily with Rhys. So, what could be the problem? Well, Rhys wants to propose and Kari is afraid. In true small town fashion, an innocent conversation between two people spreads the word and both Rhys and Kari are given a moment's pause due to well-meaning friends' input. The reader doesn't know until the very end whether Rhys and Kari will get their fairy tale proposal or not. I love how the author gives us the answer to our burning question - will they or won't they ... get engaged. I also love how the author includes so many of our favorite characters in this short story.

Fighting for Forever is released as part of the Love Ever After box set.
Goodreads • Amazon • Barnes and Noble • Kobo • iBooks

Email ThisBlogThis!Share to TwitterShare to FacebookShare to Pinterest
Labels: 5 stars, Elena Aitken, Fighting for Forever, Love Ever After, The Springs