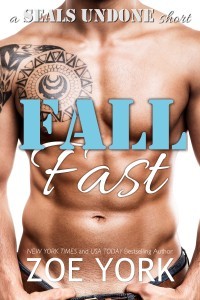 What started as a SEALs Undone short story continues…


Snowed in at O’Hare Airport with a sexy flight attendant–Navy SEAL Nathan Meyers isn’t complaining. But one night with his mystery woman isn’t going to be enough,,,

My Review:
Fall Fast was originally published as a newsletter short story in the middle of Zoe York's SEALs Undone series. I'm thrilled that she has followed through and expanded this into a full novella. I read the original short story and was intrigued with how she structured the introduction of the characters and where she left off at the end of the short story - with the anonymous couple going their separate ways and one leaving a clue for the other.

Zoe York creates fantastic alpha-male characters in this series. Nathan, like the other SEALs on his team, is a warrior through and through. We see a lighter side of him too, though, as he thinks about visiting his sister and having "Uncle Nathan Fun Times" with his nieces and nephews. You also see his lighter side when dealing with his teammates in non-business activities. He's got a great sense of humor. But also like every SEAL in the series, he's got an amazing sensitive side. He decides that what he wants early on is Emme. He truly did "Fall Fast". But he understands why she's hesitant to get involved in a new relationship and he waits patiently until he knows she's ready. When she finally admits that she's ready, I laughed at his response. "Okay? Shit, I should have been pushy before." - that was a text!

And in true SEALs Undone fashion, Nathan comes completely unglued when it comes to falling in love with Emme. He gets so completely in his head and literally tongue tied as he finds himself needing to lay his heart of the line. Luckily, Emme is as careful with his heart as he is with hers. A happy edition to the SEALs Undone series.