Spotlight and Giveaway: "Chalk Lines and Lipstick" by Ophelia London 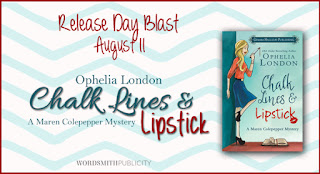 We're celebrating the release of CHALK LINES AND LIPSTICK by Ophelia London! Check out the excerpt and giveaway below! 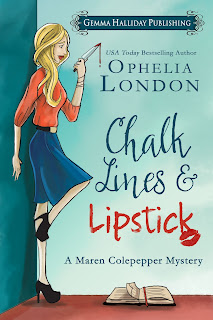 BLURB:
Maren Colepepper thought she had it all: a career at a fashion magazine, a successful boyfriend, and a glamorous New York lifestyle. She thought wrong. When her glamorous life suddenly goes belly up, Maren finds herself forced to take the only job she can find at a small town newspaper in the tiny northern California hometown she fled ten years ago.

While Maren expected her new job in no-wheres-ville to kill her with boredom, She never expected to be front row to a shooting on her very first day! Worse yet, Maren is knocked unconscious at the scene, and when she comes to, the body has gone missing and she's been scooped by another reporter. Talk about a bad first impression. Now Maren is hot on the trail of the story of a lifetime, involving a shady lumber mill and the foresting of old-growth redwoods—a ginormous crime in her neck of the woods! Between her suddenly flirty new editor, her supremely hot new neighbor, and a lovably meddling family, Maren find small town life anything but boring. But if she can't find the shooter before he strikes again, it may even become deadly!

"What is this thing?" His husky voice lilted through the darkness as he fisted the top of my hair.


"A bun."
"It's ingenious. Gives me easy access." His mouth flew to my neck, planting kisses down the side, leaving warmth and tingles all along the way. But despite his comment, a minute later, his hands tunneled into my hair, undoing the knot, releasing my hair to fall in heavy waves, which he interchangeably combed through with his fingers and then swept away from my neck to restore that "easy access."

His indecisiveness about what he wanted more was about the sexiest thing ever. 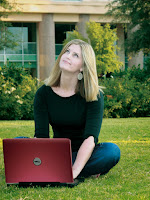 USA Today bestselling author Ophelia London was born and raised among the redwood trees in beautiful northern California. Once she was fully educated, she decided to settle in Florida, but her car broke down in Texas and she’s lived in Dallas ever since. A cupcake and treadmill aficionado (obviously those things are connected), she spends her time watching arthouse movies and impossibly trashy TV, while living vicariously through the characters in the books she writes.

Ophelia is the author of DEFINITELY, MAYBE IN LOVE; ABBY ROAD and CROSSING ABBY ROAD; the Perfect Kisses series including: FALLING FOR HER SOLDIER, PLAYING AT LOVE, SPEAKING OF LOVE, and MAKING WAVES; and the upcoming AIMEE AND THE HEARTTHROB for Entangled’s Teen Crush. Visit her at www.ophelialondon.com, but don’t call when The Vampire Diaries (or Dawson’s Creek) is on.