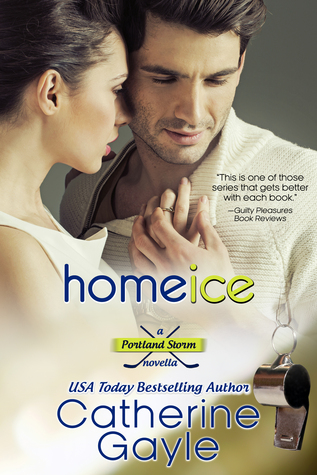 Synopsis:
There’s only one person Portland Storm head coach Mattias Bergstrom allows to see his soft side: his sister, who was born with Down syndrome. She lives in Sweden, so he doesn’t worry he’ll accidentally reveal other than the hard-assed defenseman-turned-coach his players know. At least not until his sister’s doppelganger leaps for one of his young D-men before the team’s charity skills competition and melts Mattias’s frozen heart.

Paige Calhoun has her hands full with four exceedingly boy-crazy, hockey-loving daughters—three teens and a pre-teen with Down syndrome. Everyday life is a challenge. Taking all four girls to the StormSkillz event with no assistance? The magnitude of her task was daunting enough before her youngest spotted the hockey player of her dreams and barreled through the crowd to claim him.

The team’s sexy-as-sin coach intervenes, and Paige feels just as boy crazy as her daughters. Charmed by the youngest, he decides to give the girls a weekend they’ll never forget. It never crossed his mind that, in doing so, he might end up giving himself an unexpected happy ever after with Paige.

My Review:
Home Ice is a novella in the Portland Storm series and the only complaint I have is that it wasn't a longer book - it ended too soon. In typical Catherine Gayle fashion, she includes an aspect of a social element to each of her books and in Home Ice, it's living with a child with Downs Syndrome. The author wonderfully depicts the sweet innocence of Paige's daughter with DS. Mattias is immediately drawn to Paige's daughter because he has a sister with DS. And then he sees Paige, and he is a goner!

Also in typical Catherine Gayle fashion, Home Ice has plenty of heat. Having older children myself, I enjoyed seeing a bit more of a "mature" love relationship. The author demonstrates the challenge of dating with children, and planning around alternate weekends, and babysitters, and having to go out as a family instead of a couple. But that didn't take away from the heat that Mattias and Paige generate when they are away from the prying eyes of the kids. Woo Hoo - hot!

Paige's older, teenage kids also add a fun aspect to the story, with their giggling worship of the Portland Storm players, their teasing of their mother when Mattias asks her out, and even their horror when they try to text their mom and Mattias, and suffer the fate of autocorrect. It all made the love story seem very real and very relatable.

Another great contribution to the Portland Storm series.