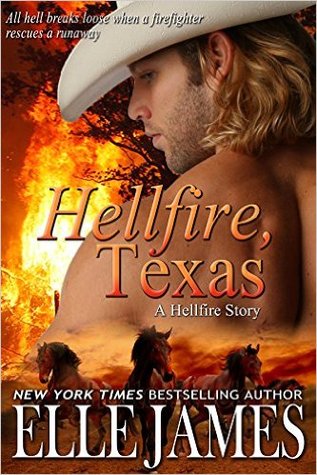 Synopsis:
Becket Grayson, rancher and volunteer firefighter assists a damsel in distress when her car catches fire on a dry country road near Hellfire, Texas. When he discovers she was his little brother’s classmate and is running away from an abusive ex-boyfriend, he offers to help.

Kinsey Phillips is desperate to get away from her ex-boyfriend who is a mean drunk with a habit of beating her whenever he feels like it. When she heads back to the only home she’s ever known, her old high school crush comes to her rescue. With the help of Becket and the entire Grayson family, they struggle to keep Kinsey safe when her ex-boyfriend comes to reclaim her.

Warning: Things are heating up in Hellfire, Texas

There's a 12 alarm fire in Hellfire, TX and it's burning between Kinsey and Becket. This book, being released initially as part of the 12-alarm cowboys box set, is hot. The author manages to develop a new relationship between Kinsey and Becket while accurately and sensitively portraying the after effects of domestic abuse. I really appreciated how the author includes the emotional reaction of a domestic abuse victim, how the support of other people can help that victim, and other resources available to a victim, all in the context of a contemporary romance. I also loved the firefighter aspects of the story - give me a cowboy AND a firefighter in the same character - yummy. The author also introduces us to other members of the Grayson family, which I could only hope means there are more stories yet to come from Hellfire, TX. 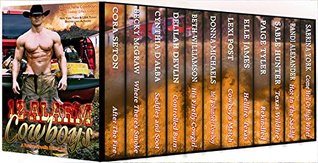 Elle was born on Fairchild Air Force Base, Spokane, Washington to parents who taught her the value of hard work. She grew up as a military brat moving from place to place, alas, only stateside in lovely places like Glasgow, Montana, Abilene, Texas and various places in California and Washington. Elle got her creative streak from her talented artist mother, her tenacity from her wonderful father and her inspiration from her writing buddy and delightful sister, Delilah Devlin.

As a former member of the Army and Air Force Reserves, Elle's traveled across the United States and to Germany, managed a full-time job, and raised three wonderful children, Courtney, Adam and Megan. She and her husband, Cleve, have even tried raising exotic birds in the Texas Hill Country. Ask her and she'll tell you what it's like to go toe-to-toe with an angry 350-pound bird!

Elle always loved playing make-believe and inventing stories of adventure and fun. At the turn of the century, she and her sister, Delilah decided it was about time to take writing by the horns and make it happen! They challenged each other to write a romance novel. After chapter one, they decided to join forces and learn the craft together. Their first four novels were co-authored. After that, they took off on their own. Delilah turned to the hot stuff, writing romantica for Ellora's Cave. Elle writes a variety of genres from romantic comedy to suspense. She loves writing paranormal elements into her projects and does whenever possible!

For the first four years of Elle's writing career, she wrote, entered contests, finaled and began winning! In 2004, she won the RWA Golden Heart for Best Paranormal Romance for her manuscript TO KISS A FROG. There's Elle at the left with her Golden Heart necklace. TO KISS A FROG was her first book to sell.

In 2004, Elle left her successful career as an Information Technology Manager to pursue writing full time. She loves escaping into her stories, learning and growing with each character and plot. She writes because she likes to experience and evoke all the emotions from happy to sad, funny to frightening. She digs them all!

At home in Northwest Arkansas, Elle is busy writing tales of murder and suspense for Harlequin Intrigue, Romantic Suspense and Nocture. Her first Harlequin, BENEATH THE TEXAS MOON, was released in March 2006 and was a Romantic Times Top Pick for the month! She 's written numerous stories since and is now writing SEAL heroes. Stay tuned for more from Elle James!

Other authors in the 12-Alarm Cowboys Box set: