Book Tour and Giveaway: "The Secret Sister" by Brenda Novak

Welcome to my tour stop for The Secret Sister by Brenda Novak. This is the first book in her Fairham Island series. It is a women's fiction novel that released July 28th. The tour runs July 27- Aug. 7th. Check out the tour page for the full schedule. 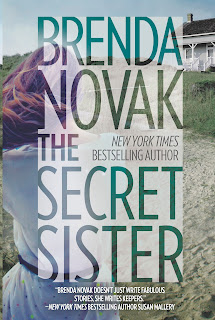 Did she once have a sister? Has her mother lied all these years? Why?

After a painful divorce, Maisey Lazarow returns to Fairham, the small island off the North Carolina coast where she grew up. She goes there to heal—and to help her brother, Keith, a deeply troubled man who's asked her to come home. But she refuses to stay in the family house. The last person she wants to see is the wealthy, controlling mother she escaped years ago.

Instead, she finds herself living next door to someone else she'd prefer to avoid—Rafe Romero, the wild, reckless boy to whom she lost her virginity at sixteen. He's back on the island, and to her surprise, he's raising a young daughter alone. Maisey's still attracted to him, but her heart's too broken to risk…

Then something even more disturbing happens. She discovers a box of photographs that evoke distant memories of a little girl, a child Keith remembers, too. Maisey believes the girl must've been their sister, but their mother claims there was no sister. Maisey's convinced that child existed. So where is she now?

This book is so much more than women's fiction, or a contemporary romance - its real life. The author gives us a look into the lives of Maisey and her wonderful, complicated family; and Rafe and his life, which USED to be simple until Maisey came along.

Josephine, Maisey's mother, is hard to like. I didn't like how Maisey kept bowing down to her, but in reality, its how she and her brother have learned to survive. The descriptions of treatments hefted on brother were disturbing - it's no wonder he turned to a life of mischief and drugs. And its a wonder that Maisey came out somewhat normal. The loss that she has suffered has been piled on and her wariness is understandable - but I feel bad for Rafe who got jerked back and forth as she worked her way through her relationship with him while struggling with her brother, her mother, and even her ex husband.

Boy, I love Rafe. He is sensitive and kind but doesn't just let Maisey walk all over him. He sets some ground rules for how he's willing to be treated, but also makes his feelings known for Maisey. I love that he is confident in how he feels and once he's confident in Maisey's feelings, he confronts what is probably the major barrier to his happiness with Maisey - Josephine. I believe that he earned her respect when he did that and Josephine is definitely redeemed in my eyes in the end, in her relationships with Laney and Roxanne!


Giveaway:
Five (5) copies of The Secret Sister by Brenda Novak
US/CA
Ends Aug. 12th
prizing provided by the publisher, hosts are in no way responsible


This event was organized by CBB Book Promotions.