Review: "Love on the Slopes" by Amy Manemann 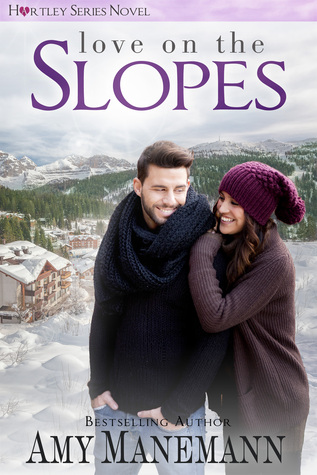 Jessa Hartley is haunted by memories of the night she threw herself at her childhood crush, Dominic DeRenzi – and he turned her away. Years later, Jessa has managed to put the past behind her and climb up the ranks as head instructor of the ski lodge she one day hopes to purchase. Only her plans take a nosedive when the smooth talking Italian shows back up in town. Even worse, he’s planning on purchasing HER lodge.

After surviving a disastrous marriage, Dominic DeRenzi returns to Jackson Hole, Wyoming, hoping to make a fresh start for him and his six year old son by purchasing the old ski lodge. Until a chance encounter with Jessa Hartley throws his well laid plans off track. The once innocent girl from his childhood has grown into the beautiful woman he always knew she would become, and he is painfully reminded of the night he over stepped his bounds and kissed her. Then broke her heart by sending her away.

Rekindling the flames of their past isn’t part of the plan, yet Dominic and Jessa soon find they’re helpless to stop the fire that burns brightly between them. He broke her heart the first time he left, but can he make her see this time around he’s here to stay?

I've read several of Amy's book and this one is by far my favorite. I think the characters are well developed and the story is very emotional. I love "first love" reunions and the author did a great job of creating stress and angst as the couple start to rediscover themselves. I love how Dom was initially blind-sided by Jessa's arrival but quickly decided he wants to rekindle what was there previously, and works methodically and sensitively to rebuild love with Jessa. As they get closer, it's fun to watch as Jessa sees a situation through the "goggles" of her previous relationship with Dom and jumps to the completely wrong conclusion. And Dom reactes in EXACTLY the right way and in the way that Jessa needed him to react to show he's truly serious about her and their future together.

As this is the first book in the series, the author has also set us up to get excited for stories about the other members of Jackson Hole, and the Hartley family and what is driving their lives and their loves. I look forward to reading subsequent books in the series, but in the meantime, I'll revel in the joy and love that radiate from Dom and Jessa in this story of Love on the Slopes.

Amy Manemann is an International Best Selling Author. She writes sexy and intriguing romantic suspense, contemporary romance (NEW), young adult paranormal romance, and dabbles in children's books. She resides in her hometown along the Mississippi river with her husband and their two children. When she isn't plotting her next book, she enjoys spending time with her family and friends, and diving into a good book.


Amy is also a site administrator for the World Literary Café, an online literary community for authors and readers. www.worldliterarycafe.com