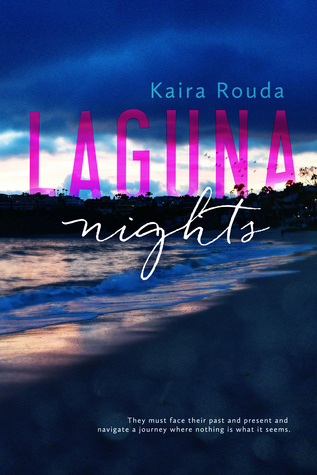 Madison Alcott left her Laguna Beach childhood in the past as soon as she could, never imagining she’d be forced to return. Caring for her ill mother and holding down a high-pressure position at the best resort in town, Madison’s life is as good as it could ever be in Laguna Beach. And blissfully, nobody knows her as Holly anymore, the name she used on television. Everything changes when her high school boyfriend appears in the lobby. He was the reason she’d left Laguna in the first place when he humiliated her on national television.

Josh Welsh’s star has been dimming ever since he shot to fame as the high school heartthrob on the reality TV series Laguna Nights. Hoping to reignite his career, he agreed to host a travel show, with the first episode shooting in his old hometown of Laguna Beach. Of all the negative scenarios associated with filming in Laguna, Josh hadn’t calculated a run-in with Madison, or that the same deep connection he felt for her in high school would still be there.

Madison and Josh’s reality TV relationship exploded years ago but when the new series forces them together, they must face Laguna Nights past and present.

I love reading the first book in a series - it sets the stage for the tone of the series and introduces you to characters you'll fall in love with over and over again. Laguna Nights is no different. It is a great introduction to the Laguna Beach series and introduces us to a wonderful west coast town. I've read many romances set in beach towns but haven't visited Laguna Beach before. The author does a wonderful job of painting a picture of the town, with the cliffs and the caves and the beaches and the small town feel on the coast of California. She makes me want to walk down the street and have a seat on the patio of a local restaurant and watch what sounds like a spectacular sunset.

The author creates compelling characters in Josh and Madison. This story is a first love, second chance story with an interesting twist - as teenage loves, the characters experienced their love and subsequent breakup on the world stage on a reality TV show. And in true reality TV fashion, everything is blown up to larger proportions than it actually is, and NOTHING is at it seems. What I like about Josh is that while he's confident in his feelings towards Madison the minute he sees her again, what he isn't confident in is his future as an actor. Josh demonstrates a vulnerability at times, and confidence at others, which makes him a very believable character. In Madison, the author creates a strong, intelligent woman who knows what she wants in life and is working to achieve just that. And from the moment Josh reenters her life, her head and her heart are at war. Her plans don't include reviving a hurtful teenage relationship with a wannabe Hollywood star. But plans don't matter when the heart's involved, and Madison finds herself drawn to Josh, and the spotlight, once again. Madison and Josh approach their relationship this time around with a maturity they didn't have at the time, and with their eyes open to the reality of reality TV, which gives them every opportunity for happiness.

This story isn't overly sensual - the romantic scenes are descriptive but tastefully done and appropriately included as to enhance the story and not dominate it. The landscape of Laguna Beach is wonderfully created through imagery that transports the reader along with the characters to what I can only believe through the words is a beautiful beach-side town. And the characters and storyline are compelling and draw the reader in, making me want to read faster and faster in hopes of finding the happily ever after that Madison and Josh deserve. In all, a delightful read!

I’ve dreamed of being an author since third grade and that dream finally came true when Real You Incorporated: 8 Essentials for Women Entrepreneurs was released. I had 20-plus years of marketing experience under my belt, and I had created a personal and business branding process, which I packaged in Real You Incorporated to help women entrepreneurs define their brands. The experience of writing that book, and touring the country to speak about it, was an awesome culmination to my marketing and C-level business career. (I created the first female-focused brand in real estate, and the industry’s first consumer Web 2.0 portal. Before that, I showed an Inc. 100 firm and franchisor that women were their customers.) Along the way I’ve been honored with numerous Addys, Webbys, and Prism Awards.

During my time building the Real Living brand with my husband I won the Stevie Women in Business Best Entrepreneur Award, Entrepreneur Magazine’s Fifty Fastest Growing Women-Led Businesses and was named one of Forbes’ Top 50 Women in Business to follow on Twitter. (My favorite award, though, was Kiwanis International’s Humanitarian of the Year recognizing me for starting the first homeless shelter for families in Columbus, Ohio.) I have been interviewed on Fox News, NBC and local media outlets across the country. And once Real You Incorporated was released, I spoke to organizations across the nation including The Entrepreneurship Institute, NAWBO, the American Marketing Association, eWomanNetwork, Rotary, Kiwanis, YWCA, Austin Balance Expo for Women, Key4Women Program of Key Bank, Women’s Council of Realtors and the National Association of Realtors. I’m looking forward to my first speech for the Romance Writers of America in July 2015.

And then in 2010, with the help of a tweet, we sold Real Living, the brand my husband and I had built together. I found myself in the enviable, but scary position of asking myself: now what? We’d moved from our hometown of Columbus, Ohio, to California and once the kids were settled, it was just me and my computer and a too-quiet house. The answer had been there all along. Finally, I turned to the career I’d always dreamed of and began writing full time.

My first women’s fiction novel Here, Home, Hope about a midlife makeover, ironically, was published in 2011. All the Difference followed a year later, and most recently, In the Mirror released in 2014. I love writing women’s fiction, and will celebrate two releases in 2016! I can’t wait to share more details about the stories.

I was happily writing women’s fiction, and that’s probably the path I would have followed until I went to lunch with Jane Porter, a fabulous bestselling author who had just moved to Southern California. She encouraged me to try writing romance and I did. And I loved it! The Indigo Island Series of contemporary romance novellas launched in 2014. Coming soon, expect more Indigo Island stories, as well as a new series set in my new hometown of Laguna Beach, California. Whether it’s contemporary romance or mainstream fiction, my hope is my stories sparkle with humor and heart, leaving a smile on your face when you reach The End.

I’m delighted to be able to say I’m a national bestselling author. My books have won the Indie Excellence Award, USA Book Awards, the Reader’s Choice Awards and honorable mention in the Writer’s Digest International Book Awards. The novels have been widely reviewed and featured in leading national magazines. I’m still working hard and building that career, learning from a wonderfully supportive reading and writing community. Speaking of support, I couldn’t ask for a more wonderful family. My husband and four amazing almost grown children are my biggest blessings. Oh, and my friends fill my life with joy.