Release Day Review: "Shelter by the Sea" by Elena Aitken 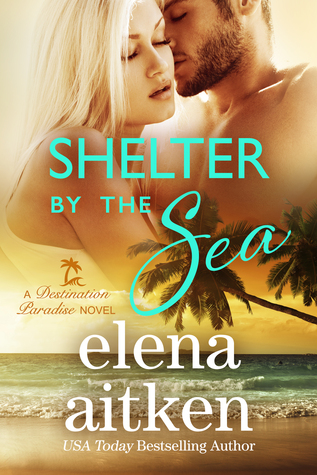 Synopsis:
He’s determined to leave his past behind. She’s committed to a new and better future. But a guarded heart and an inability to trust may be too much to overcome, even in paradise.

A mountain man through and through, Archer Wolfe never imagined he’d be willing to give up rocky peaks and pine trees for white beaches and rainforests. But sometimes leaving your life behind to start over where nobody knows you is the only solution. And that’s exactly what he’s trying to do and the pretty little blond in the tight tank top just might be the person to help him stay. Working together to run a charter business on her sailboat seems like the perfect solution for both of them, at least it would be if he could convince her to give in to the growing heat between them because it’s only getting harder to ignore the attraction between them that’s quickly becoming more than just physical.

Cass Cutler’s life is full—of nothing. Unless you count a dead end job and a pathetic excuse for a relationship with her boss—and she doesn’t. So when she gets word that her father, whom she hasn’t seen in twenty years, is presumed dead, and she’s the new owner of his yacht located in Panama, she jumps at the chance for a change. And what better place for a new start than the picture perfect beaches and crystal clear water of the San Blas Islands, especially when they come complete with a unreasonably gorgeous man who’s become the star of Cass’s very naughty dreams. And her dreams are exactly where he should stay, because the last thing Cass wants or needs, is another man in her life who’s just going to leave. Now all Cass needs to do is a figure out a way to keep their increasing attraction from distracting her as she attempts to save her inheritance—and her heart—before she loses everything.

Another great read from Elena Aitken, and a great introduction to a new series. I had to keep reminding myself that I knew Archer from her previous series, but we really get to know him in Shelter by the Sea. He's a great character with a lot of depth. He's searching for himself and doesn't realize that by meeting Cass, he begins finding himself. He's wonderfully sensitive but sexy and seductive at the same time.

Cass is a bit of a hot mess, but she's extremely strong and confident with a can-do attitude that I love. She approaches life with a positive attitude, even when everything is conspiring against. She and Archer are pretty perfect for other. It is fun to watch their push-pull as they fight their feelings for each other and what they think they want out of life.

The author introduces some wonderful, quirky characters that really bring depth to this story, from the woman on the island to the twins and Joe's ex-wife. When I realized the direction the author was headed with the three-day tour and the women on board, I laughed out loud. What a perfect storm of awkwardness for Archer!

The mystery around Cass's father gets wrapped up a bit quickly nearly the end of the story and while I was happy to read the resolution, I felt after being stretched out for the majority of the book, it was wrapped up rather abruptly. But, Cass and Archer's story is brought to a happy conclusion with so much left teasing us for future stories from Panama.

Email ThisBlogThis!Share to TwitterShare to FacebookShare to Pinterest
Labels: 4 1/2 stars, Elena Aitken, Shelter by the Sea