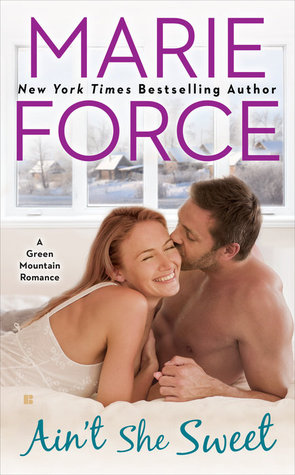 Charlotte “Charley” Abbott has gone out with every guy under thirty-five in Butler, Vermont—except for one. Tyler Westcott’s attempts to date her may be determined, and frequent, but Charley can’t stand how he acts like he knows her better than she knows herself. So when Tyler turns up at the running club Charley joined to train for a marathon, she’s almost ready to quit before she even gets started.


Tyler knows that behind Charley’s prickly personality and dismissive attitude is a sweet woman he wants in his life. And when Charley suffers an injury while training, Tyler is ready to prove that the perfect man for her has been right there all along...

My Review:
Ain't She Sweet is the newest glimpse into the lives of the Abbott family. Ms. Force teased the relationship between Tyler and Charley in a previous book and I was anxious to see how Tyler was going to win over the heart of wary Charley.  I see so much of myself in Charley - someone who can be strong and argumentative and contrary as a defense mechanism. Charley faults herself for not seeing what was happening to her previously, so she's decided to protect herself from heartbreak again. Tyler is the perfect man to break through Charley's tough exterior to see the emotional woman underneath. I love how insightful and thoughtful Tyler is - he's able to determine early-on that something is driving Charley to be the way that she is and he's determined to tread lightly but deliberately. I love how attentive Tyler is to Charley. I just really love everything about Tyler.

Charley is a character that you love - even though she makes it hard - and there are times that you want to smack her upside the head. I enjoyed watching her transition as she grew to trust Tyler and open herself up to things she didn't think she ever wanted again.

I felt much like the residents of Butler when they were worried about Fred. I was surprised it took so long for Fred to make an appearance and I was a little disappointed that we didn't see more of him in the story - maybe he's been off mourning the loss of his first love (Cameron).

As with all Ms. Force's romances, the intimacy is steamy and well done. The characters certainly got creative while Charley was recuperating from the injury that landed her in Tyler's house in the first place!

Contact Marie at marie@marieforce.com.
Posted by Nancy at 5:00 AM