When seven-year-old Éclair goes geocaching for the first time, she finds a treasure that isn’t the one she imagined. Young readers will discover what geocaching is all about through Éclair's journey with her eccentric grandma.

This book will be hidden in geocaching sites around the US as a fun read for early readers. My hope is that young readers all over the US will learn what geocaching is through Eclair's antic with Grandma Stella.


Here’s what readers are saying:

“This heartwarming, educational story will show children that even though things don't always turn out as we expect them to, sometimes they're even better than we could ever have imagined.” Mel Finefrock, Patchwork Poetry.

“I loved it. The grandma was modern and fun! I liked how Éclair was curious and tender-hearted! Their relationship is touching and realistic!” Cindy Nash, Kindergarten Teacher

"I love how adventurous Éclair and Stella are! I love geocaching and it was super fun to read about the awesome treasure hunt Stella took Éclair on." Olivia Rattie, 8 years old

“Éclair had so much fun geocaching that I would love to do that too. I can’t wait to read about her next adventure.” Katrena Strother, 8 years old

“Bored? Need something more exciting? Do what Éclair and Stella did. Try geocaching.” The Simon Mates, avid geocachers


Except from Eclair Goes Geocaching


Chapter One – What is Geocaching?

“Éclair, would you like to go geocaching with me?” my grandma, Stella, asked.

I was only seven. I didn’t know what that was.

“We hunt for treasure that’s hidden in a box,” she said.

I imagined gold and silver coins, bright-colored gems, and fancy jewelry.  “Yes, I want to go,” I said. I needed to find a treasure so Dad could have extra money to buy us a house. Then my two-year-old sister, Meggie, and I could live with Mom and Dad. In our own house.

For now, though, Meggie and I lived with Stella on her farm. I loved living with Stella, but I hated being separated from Mom and Dad. Mom was sick and far away at a place to get better. Dad was looking for a new job closer to Stella’s farm, but he hadn’t found one yet. That’s why I really needed to find the treasure.

Maybe I should dress like a pirate. They’re good at finding treasure.

Stella showed me something called a geocaching app on her phone. I think an app is kind of like a fun game. “This tells us where the cache boxes are hidden.”

“Cash boxes?” Dad was always short of cash. I got so excited my heartbeat drummed in my belly.

Stella pointed to her phone screen. “See this map?”

I looked and nodded.

“It shows the location of a cache box hidden near my farm. We will hike in the woods on the trails to find the box using a GPS.”

Did she say jeeps? Maybe we would ride in a camouflaged one with fat tires.

“Huh?” It sounded like what the giant said in “Jack and the Beanstalk.” Did that mean we would have to fight a giant to get the treasure?

I secretly hoped so, because I wanted to be a hero. I knew what I would do. I would bring black pepper and throw it at the giant’s nose to get him to sneeze. It would give me time to escape with the loot. Loot was pirate talk for money.

Maybe I should bring Earl, my pet rock, too. I could throw it at the giant like David did when he killed Goliath.

Meggie was going to stay home with Gretchen, our babysitter—the girl with purple stripes in her hair, a gem on the side of her nose, and a butterfly tattoo on her arm. She played games with us and acted silly whenever Meggie cried. One time when she babysat us, she made cookies and let us eat some of the batter. My stomach got so full it felt like a balloon, and an hour later it popped. I won’t say what happened, but the cookies didn’t stay in my tummy for long. I don’t want to eat cookie dough again.

Stella said to pack a backpack. I didn’t want to put too much stuff in my bag because there had to be room to carry the treasure home.

Here was what I put in my backpack: the pepper shaker, Earl, two packages of peanut butter crackers, two juice boxes, a magnifying glass, and a picture of Mom and Dad. (I tried not to look at Mom’s picture for too long. I missed her.)

Find out more about Geocaching from HERE

Hi, I’m Éclair and I’m seven. My sister Meggie is two. When mom got sick we had to go live with Stella, my dad’s mom, the one with maroon colored hair. I begged Dad not to make us stay with her because she beat her horse and was going to eat her rooster, but he didn’t believe me. Even after I pretended I was going to barf, he left us with Stella.

So there we were, Meggie and me, on a strange pink farm with a skinny horse, a mean rooster, and Stinky Stella who had a living room filled with dead deer heads.

What would she do to us?

Would we end up on her wall too? 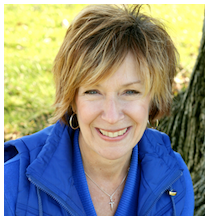 Michelle is a fulltime employee of God's kingdom, writing and encouraging writers every day. She's often a sucker for emotional stories, her sensitive side fueling the passion for her character's plights, often giving her the ability to show readers the "other" side of the story.

She grew up in the burbs of Detroit with five brothers. No sisters. Each time her mom brought the boy bundle home from the hospital Michelle cried, certain her mom liked boys better than girls. But when her brothers pitched in with the cooking, cleaning, and babysitting--without drama, Michelle discovered having brothers wasn't so bad. They even taught her how to take direct criticism without flinching, which might come in handy with book reviews.

Michelle is living her dream--writing every day and thanking God for the stories He puts in her path. When Michelle isn't writing she's winning ugly on the tennis court. She's known as "Queen of the Rim Shots." No joke. It's ugly.

CACHE a PREDATOR is currently hidden in geocaching sites throughout the US. If you'd like to see where there might be a novel hidden in your area, please log in to geocaching.com and search for trackables at IN SCRIBE--that's Michelle.

I received this book to review through Beck Valley Books Book Tours, all the opinions above are 100% my own.
NOW FOR THE AUTHOR'S GIVEAWAY Enter Below and Good Luck!
a Rafflecopter giveaway