Release Day Review: "Need You for Always" by Marina Adair 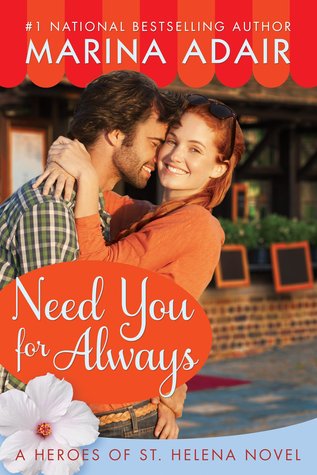 Emerson “Emi” Blake dropped out of culinary school to care for her ailing mother, but she has bigger dreams than running St. Helena’s most popular pita cart. First on the menu: upgrade to a gourmet food truck. A new part-time job as a personal chef will definitely provide the funds, but it also forces her into close contact with her one and only one-night stand, Dax Baudouin, who’s daring her to try a second taste.

Former army Ranger Dax has a clear mission: come home, get healed, and get gone. Yet Emi’s tough-girl exterior and hidden soft side are even harder to resist than her mouthwatering baklava. After years of battles, he knows better than to try and rescue anyone—not that she’ll let him get close enough to try. Truth is, Dax is starting to think that Emi’s the one person who can save him…if he can just persuade her to give him another shot.

Need You for Always is the first book I've read by author Marina Adair. I really enjoyed this book. The author spends a good deal of time on character development and I really felt as though I understood the characters and what was driving them to behave the way they did, and to feel the way I did. I love both of the main characters - Emerson and Dax - as they are complicated characters. Dax is afraid to commit, afraid to be home, he's frankly pretty afraid of everything going on in his life right now. He spend a good part of the book trying to outrun his demons with no success. Emerson is a commitment girl, even though she says she isn't. She can't help it - its in her DNA to get involved fully with the people in her life, whether they be her family members, her friends, or the men in her life. She goes into her tryst with Dax claiming it was a one-time thing but she was only fooling herself. In true romance novel fashion, Dax goes running when the going gets tough - at least the relationship going, that is. His answer for not knowing how to deal with the situation is to run, and it takes a frank conversation with his brother to realize how dense he is being.

The main reason I gave this book a 4 star instead of a 5 star rating is that I felt like it dragged a little in the middle. There were so many scenes that I didn't feel contributed much to the progression of the story or of Dax and Emerson's relationship. They were cute scenes but I felt like the book was dragging for a while. It picked back up at around the 65% mark and was well paced from there.

The sex scenes are pretty hot and both characters seem pretty open to being adventurous in their involvement. I enjoyed the secondary characters - Emerson's family, Dax's family. They created a very believable situation with realistic situations and struggles for our characters. All in all, I enjoyed this book and look forward to future books in the Heroes of St. Helena series.

Marina Adair is a #1 National best-selling author of romance novels. Along with the St. Helena Vineyard series, she is also the author of the upcoming Sugar, Georgia series and Tucker’s Crossing, part of the Sweet Plains series. She currently lives with her husband, daughter, and two neurotic cats in Northern California.
As a writer, Marina is devoted to giving her readers contemporary romance where the towns are small, the personalities large, and the romance explosive. She also loves to interact with readers and you can catch her on Twitter or visit her on Facebook.
Website: http://www.marinaadair.com/
Posted by Nancy at 5:30 AM

Email ThisBlogThis!Share to TwitterShare to FacebookShare to Pinterest
Labels: 4 stars, Heroes of St. Helena, Marina Adair, Need you for Always