"The Wreck" by Marie Force 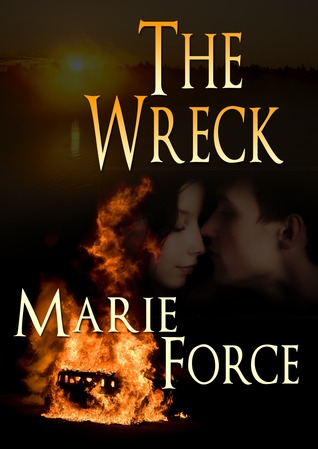 Carly Holbrook and Brian Westbury are weeks away from their high school graduation. The young couple plans to marry before they head to college, and their future seems bright with promise.

Everything changes one spring night when their six closest friends, including Brian's younger brother, are killed in a fiery car accident that Carly and Brian witness. The trauma leaves Carly unable to speak, and Brian is forced to make unimaginable decisions about a future that once seemed so certain. With Carly incapable of going forward with their plans, Brian leaves home—and Carly—for good. Fifteen years later, disturbing new clues indicate the accident that wrecked so many lives wasn't an accident at all, bringing Brian home to face a past—and a love—he's never forgotten

I recently re-read Marie Force's The Wreck.  I've read a lot of what Marie has written and The Wreck was one of the first books of hers that I read.  But it shook me.  While I had read and re-read many of her other books, I hadn't mustered the fortitude to re-read this book.  But after reading a less than satisfying book, I wanted to re-read one I knew was well written.  So, I picked it up.  And I wasn't disappointed.


Marie Force's "The Wreck" takes you on a journey with two people, Brian and Carly, as they are forced to grow up way too soon due to tragedy. The effects of that tragedy are far reaching for Brian, Carly, and their extended families. The Wreck takes us through their lives before and after "the wreck" to their ultimate reunion due to further tragic events.

The Wreck is an emotional read. I was struck early on at Brian's emotional maturity dealing with the tragedy in his life. His ultimatum may have appeared unfeeling and immature towards Carly, but I actually believed it was a mature reaction - understanding that he needed to do what was necessary to move on with his life.
Carly's reaction to "the wreck" was severe. Little did we know the full impact of the repercussions of the wreck until later in the book. Carly shows an enormous strength, despite her loss of the ability to speak. While it took her longer to begin to move on with her life, she might have demonstrated more strength than Brian. Brian may have moved on with his life, but his life was shallow and empty. He didn't form relationships - he was just going through the motions of life.

Until he came home.

A subsequent tragedy was a turning point for Carly, and ultimately for Brian. Their reunion when Brian came home was really and truly the point at which they both began to heal.
Marie Force's writing made it easy for me to connect with the characters at an emotional level and feel the love and fear and anxiety that they were feeling. It flowed very well and it made it easy for me to turn the pages as quickly as I needed to because I REALLY wanted to know how it ended.

I'm always happy when I read one of Marie's book, and this one is no different.  It is a stand-alone novel, and one of her first, I believe.

Goodreads -  Amazon - Barnes and Noble
Posted by Nancy at 9:00 AM