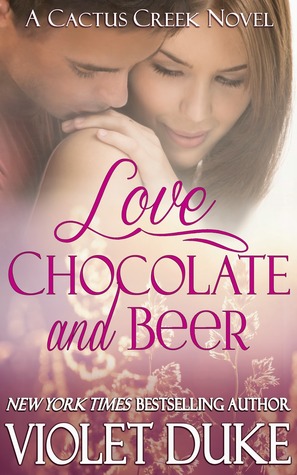 Romance has met its most unlikely match-up…

Luke Bradford is a chocolatier on a mission. After moving his chocolate shop, and newly single life, to the quirky town of Cactus Creek, Luke wants nothing more than to devote all his energy into making his business a success—by taking the romance market by storm. But his grand plans get thrown for a loop when he locks horns with the feisty beer-brewing beauty next door who calls his ‘romantic idealism’ a load of fairytale bull. Soon, driving the woman sparking nuts becomes another wickedly fun priority he simply can’t get enough of.

In his defense, she’s addictively easy to incite…and plain impossible to resist.

Beloved local brewmaster Dani Dobson is beyond riled up. It’s bad enough the new shop owner in town comes locked and loaded with both a distractingly rugged charm and sexy flashing dimples, but the whole only-in-the-movies variety of romance he’s selling—the kind her world has been crushed by before—is really doing a number on her allergy to unrealistic clichés. What’s worse, he’s created an annoyingly clever ad campaign that dubs ‘beer joints’ like hers as the “cave where romance goes to hibernate.” The nerve of that man.

Combustible chemistry or not, damn it, this means war. The stakes…very likely, her heart.

This was my first book by Violet Duke, but I doubt it will be my last.

Lots of Love for "Love, Chocolate, and Beer". I was thankful that the author has included the prequel - which was a good length - in this book. I feel certain I would have been lost had I not had the background from the prequel.
I loved Luke as a strong, masculine, sensitive hero. He was clearly in touch with his feelings and was confident in his ability to express them to Dani. I loved how Dani and Luke met and it set an interesting context for the development of their relationship.
Dani was a bit of a tougher character to crack. There were so many complex situations that made her who she was and it took most of the book to peel the onion to the real Dani - her ex, her father, her business, her brother, her secrets, etc.

There were several times I felt the author had addressed what needed to be addressed with the characters and could get them to the point of moving forward, and then she'd throw something else at it. There were probably a couple more plot twists and turns than necessary to tell the story but I enjoyed them nonetheless.

I loved the little looks into the relationships that were developing among their friends and family. And the fact that the author wrote the marriage between Dani's brother and his husband as matter-of-fact as an author would write a heterosexual marriage. It wasn't focused on as a "cause" or tried to be "explained away" - it just was and it fit comfortably into the book because of it.

The book was well written and it flowed well. It had the right amount of dialogue vs. "hearing thoughts" statements to keep the reader engaged with the storyline but understanding of the backstory.