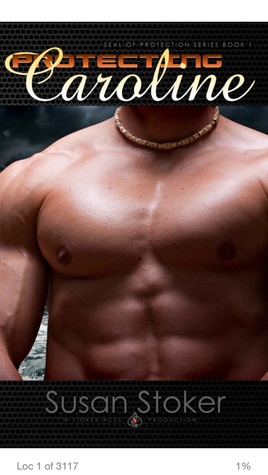 Matthew “Wolf” Steel hated flying commercial. Luckily his job as a Navy SEAL meant he didn’t have to do it very often. He’d been unlucky enough to be assigned a middle seat on the cramped jet, but fortunately for him, the woman next to him was willing to switch seats with him. Hoping for a relaxing flight, Wolf was pleasantly surprised at the good conversation and sense of humor the woman had as they flew 36,000 feet over the countryside.

When Caroline boarded the plane to Virginia to move across the country for her new job she never expected to be seated next to the hottest guy she’d ever seen. She also never expected he’d be so easy to talk to. She knew he’d never be interested in talking to her if he hadn’t been trapped in the seat next to her, but it was a nice way to spend a long plane ride.

Neither Wolf nor Caroline were prepared for a terrorist hijacking of their plane, but if Caroline thought that would be the last time she’d see, or need, Wolf, she’d be sorely mistaken.

Start the SEAL of Protection Series with Caroline and Wolf's story


With a storyline description that sounded intriguing - a civilian getting caught up in a hijacking - I expected a compelling, romantic suspense story. Unfortunately, I was disappointed with the result. There was so much potential in the story but the writing just fell flat.
I think the most frustrating thing about the story was the constant change in point of view. Typically whole chapters, or major sections of chapters will be from a single character's point of view and then there may be a space or a divided that clearly demarcates a change in POV. Instead, I would finish a paragraph and get to the next one and all of a sudden it was in the other character's POV. Its one thing to write dialog and have a conversation - but this was going back and forth with their thoughts and their points of view. And typically in a book like this, it will stick with two points of view - the hero and the heroine. Not with this book. Once new characters were introduced, every once in a while it would jump to one of their points of view for a paragraph and then jump back. It made for a very disjointed read and made it difficult to connect with the characters because you weren't with them.

And Woah is not a word. Whoa is!

Caroline's character was incredibly frustrating for me. She explained how she was "invisible" to other people and I actually like how she explained how she had actually met the 3 SEALs on the plane prior to boarding, when they didn't remember. But the entire "theme" of "I'm a nobody, nobody cares about me, nobody notices me, nobody loves me" got extremely old. She said that she understood where she was in her life and was happy by it, but her words and actions didn't convey that. It turned into a "pity party" for Caroline at the end of "woe is me, nobody loves me" and it was tired by that point.
The author overused superlatives. She sat "so quickly". He liked her "very much". The author kept using the "superlative adjectives" to try and convey emphasis on the feelings but it just didn't work - it is a better technique to find a more emphatic emotion word to convey the feelings. That would help the reader connect with the characters.
Then there were scenes that were "trite" and felt more like the author was "restating a bad movie" instead of actually doing research and writing a scene that felt realistic. For example, "'You're coming with us, bitch,' the man smirked and backhanded her hard across the face". He had just walked up to her and they hadn't even interacted. That IS like a scene from a bad movie. Another example was when Bennie went "undercover" by being a fisherman. Again, this smacks of someone who has watched too many movies but doesn't quite get it. A typical SEAL or special ops mission will likely include members of the operation in different areas of the operating zone, BLENDING IN so they aren't noticed. But they aren't "undercover". Undercover is when an operative infiltrates an organization as a member as a means of ferreting information and/or bringing down the organization.

I only finished the book because I just wanted to see how it finished but I just didn't relate to the characters enough and was disappointed because it was a story / series that I had WANTED to like but just didn't. I read many authors who have books in a series and in many of them, reading one book has left me craving the next book because I can't wait to see what's going to happen with the characters. I unfortunately don't feel that way here and won't be spending the money on the subsequent books in the series.