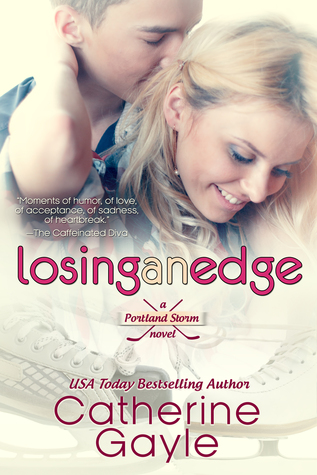 Synopsis:
Tired of being the second-best Babcock, Levi “501” Babcock is ready to outshine his older brother. Outranking his brother proves harder than he imagined—until he meets a sinfully sexy gold-medal-winning figure skater. She might be the prize he’s been searching for all along.

Bubbly and spirited Cadence Johnson is determined to escape the shackles of her former partner. Moving to Portland gives her the fresh start she’s craved, but the last thing she can afford is a distraction like Levi Babcock.

When Cadence’s past comes back to threaten her and her life is on the line, Levi might be the safety net she never realized she needed. But will Levi still care about Losing an Edge to his biggest rival, or can he finally step out of his brother’s shadow to become the hero in his own game?

Another great book in the Portland Storm series, Losing an Edge is the long-awaited story of "501". Levi Babcock is the younger brother of golden-boy Jamie (Babs), and he feels like he's been living in his shadow his entire life. It was interesting to see his struggles with self-confidence -- he has a very self-deprecating way about him that makes him endearing to the reader. It's interesting to see him come into his own as he fights his way out from behind his brother's shadow and becomes his own man.

Cadence is a strong character, although she doesn't realize it. She coming out of a painful, abusive relationship and that makes her doubt Levi's feelings for her and her own judgement when it comes to men. Who knew that Levi was just the one to help her find hope for true love.

Like most Catherine Gayle books, there is a great supporting cast of characters, from her new skating partner and his fiance, to Jonny and Sara and their hilarious preschool-aged son who repeats every word he hears, which in Jonny and Sara's house, means a string of out-of-place expletives. I laughed out loud several times when Connor would drop a well-place outburst at the most inappropriate time.

A great addition to the Portland Storm series, one that prompted me to go back and re-read the series from the beginning again, loving each book again.

If you enjoyed this book and want to know when more like it will be available, be sure to sign up for Catherine’s mailing list. You can find out more on her website, her blog, at Red Door Reads, at Hockey Romance, at Facebook, on Twitter, and at Goodreads. If you want to see some of her cats’ antics and possibly the occasional video update from Catherine, visit her YouTube account.
Posted by Nancy at 5:30 AM