Review: "His to Protect" (Bears of Grizzly Ridge) by Elena Aitken 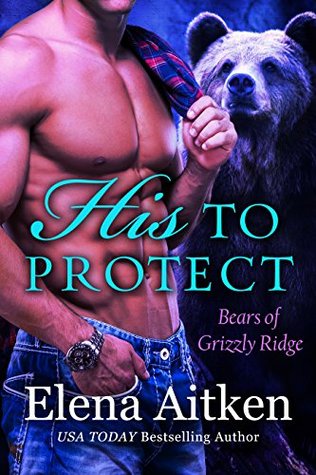 When Harper Bentley’s life begins a death spiral, she does what any self respecting woman would do—she heads for the mountains. More specifically, Grizzly Ridge. A brand new—and very remote—lodge in the wilds of Montana. The last thing she expects to find there is deliciously sexy Axel Jackson, who is more than a little wild himself and reigniting feelings she’d long since buried.


From the moment he lays eyes on her, Axel knows Harper is more than just a guest at his lodge. Much more. Every bear shifter has a mate. She’s his. And whether his brothers believe in fated mates or not, nothing will keep Axel from what is his. But first he’ll need to convince Harper that what she’s feeling is more than lust. It’s fate.

This is a new genre for me, so I didn't know what to expect. As I began reading His to Protect, I found myself trying to replace "human" activities and emotions to those being felt by the character when shifted, just to try and put myself in context. But before long, I was fully engrossed with the story and it carried me along without having to re-focus my perspective anymore. I hesitated to read the book at first, since it is pretty far out of my typical contemporary romance genre, but I'm so glad I took a chance on this new genre from a favorite author. Axel, the hero was extremely alpha, very protective, but also sensitive to Harper. I love how the shifter aspects of the story were integrated so smoothly that there were times I was trying to figure out whether Axel was in human or bear form. The heroine was a strong, sexy woman and I love how her mind was open to a relationship like she'd never experienced before. A wonderful read that leaves you wanting Axel's brothers' stories - they can't come soon enough!