Review: "When We Kiss" (Ribbon Ridge) by Darcy Burke 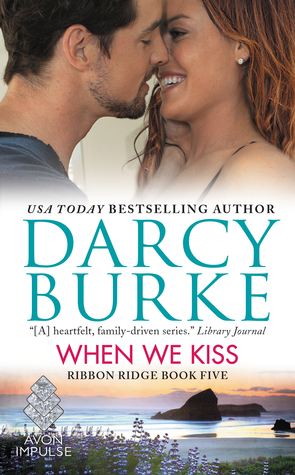 Denver real estate mogul, Liam Archer, has always been a thrill-seeker, and the loss of his identical twin brother has only intensified his reckless behavior. Sky diving, heli-skiing, motorcycle riding…he’s tried everything once. Except falling in love. Liam doesn’t do relationships, but a no-strings fling with Aubrey Tallinger—the smart, gorgeous lawyer handling his brother’s estate—is totally his speed.

At first, hooking up with Liam whenever he’s in Ribbon Ridge is perfect; but Aubrey fears she could fall hard for the sexy daredevil, if he’d only stop refusing to acknowledge the demons he’s trying to outrun. To protect herself from heartbreak, Aubrey ends their affair. But this time, Liam isn’t leaving town and instead of seduction, he wants to be…friends.


The white hot attraction between them still sizzles but Liam knows that winning Aubrey back won’t happen in his bed. He’ll have to convince her that he’s more than the careless, adrenaline junkie she believes him to be. Because when they kiss, Liam feels whole again… and he isn’t ready to give her up without a fight.

When We Kiss is Liam and Aubrey's long awaited story. We've gotten to know Aubrey as she helped the Archer family navigate the aftermath of Alex's suicide. Liam is the unique brother in the family in that he is Alex's identical twin. Ms. Burke's character development is wonderful and it's fascinating to explore the twin relationship between Liam and Alex, as well as Aubrey's guilt over her role in Alex's death.

What I like about the Archer family is that they aren't a "pretty family wrapped up with a bow." They have their own dysfunctions and skeletons in the closet - that makes the family real to the reader. In this case, its Liam and Alex's relationship dynamic we get a glimpse into. Liam and Alex had a love/hate relationship in life, and Liam's resentment has carried over long after Alex's death. It's a wonderful dynamic to watch play out.

Aubrey is a strong woman who knows what she wants, but she has her fears and anxieties, which also makes her relatable. The one thing she wants is her "happily ever after" and I like how Aubrey stood up for herself in her relationship with Liam in that regards. As a reader, it took a while for us to really understand that part of Aubrey's challenge is that Aubrey wasn't quite enumerating what she wanted to Liam. Once he finally realized what she wants out of her life, he starts to chip away at her defenses. What he didn't realize was that at the same time, he was chipping away his own objections.

Darcy Burke lives on the edge of wine country in Oregon’s Willamette Valley with her devoted husband (my own hero), a daughter and son who illuminate her world, and two Bengal cats.

Her first completed book was called The Magic Swan. Dedicated to her grandmother (who adored swans), she wrote and illustrated it in sixth grade. Her daughter loved to have her read it to her when she was younger. The story is about a guy (swan, of course), Albert, who goes on a magic kick, much to the annoyance of his girlfriend, Gwen, who loves him just the way he is. Seeking to put an end to Albert’s newfound obsession, Gwen (with the help of her awesome pal Phyllis) pretends to need rescuing. Albert rushes to Ponderosa Falls to “save” her from certain doom! Gwen happily points out he saved her without magic…and Albert realizes he has everything he wants and needs in Gwen. Naturally they get married and have many baby cygnets. As you can see, by age 12 she was plotting happy ever afters (and demonstrating her inability to ever be an illustrator).


Fast forward some number of years and she decided to get serious about writing a romance novel. Joining RWA was a huge step in attaining that goal, but understand: finishing a book is hard. And oh so rewarding. She's thrilled to be represented by the brilliant Jim McCarthy of Dystel and Goderich Literary Management and excited for her books to be read and (hopefully) enjoyed!