"Make It A Double" by Sawyer Bennett 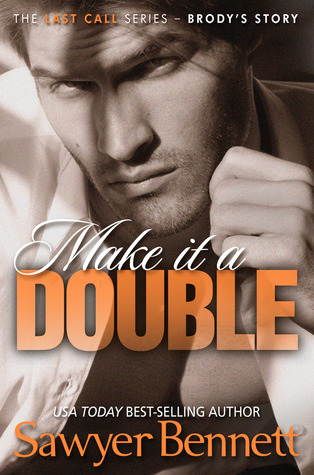 Brody Markham has endured a nightmare, spending the last five years in prison and losing everything that was dear to him. Now he’s back home, trying to survive in a world he doesn't recognize anymore. While his family and friends desperately try to reach through to him, he shelters himself further and further away from their love.
Alyssa Myers has worked her entire life to distance herself from the luxurious and privileged lifestyle in which she was raised. Running her non-profit agency, The Haven, she is content to spend her days helping abused animals find sanctuary, which fulfills her in a way that money just can’t buy.
Maybe it’s that she recognizes in Brody some of the same characteristics she sees in her homeless wards, but Alyssa is powerless to stop her personal quest to make Brody whole again.
While Brody struggles to surface from the darkness, Alyssa tries to protect her heart in case he’s not willing to accept the light that she offers him.

Make it a Double is an emotional look into a man broken by circumstances out of his control, and a woman who has dedicated her life to helping those that are broken.  I doubt Alyssa knew that her life's work of helping broken animals would give her the tools and the opportunity to help and fall in love with a broken man. Through the author's masterful development of Brody's personality as he struggles to re-enter his life after 5 years in prison, I found myself truly feeling his anguish right along with him throughout the story. It was clear from the Brody we met briefly at the beginning of the book that he had a happy personality and the brooding, introspective man that returned from prison was a far cry from the one who went in.  Brody was a well-developed character and his inner dialog gave us insight into the turmoil he faced.

Alyssa had struggles of her own, with a violent ex-boyfriend and a status-seeking mother whose image was more important than her daughter's happiness or safety. By turning away from a life of "privilege" and using her considerable funds to run a no-kill shelter and animal sanctuary, Alyssa has insight into the lives of the entitled and privileged, as well as the downtrodden.  I think her upbringing in that life has given her unique insight into what Brody is experiencing.

I really enjoyed watching the relationship develop between Brody and Alyssa, especially as he continued to fight his feelings for her because he felt it best for her.  But, as Alyssa came to know Brody in a way that no one else does, Brody accepts that he's unable to fight his feelings for Alyssa any longer.  Through her support of Brody and the life he has been destined to live, she shows Brody a level of acceptance he didn't realize he needed.  They each demonstrated their love for the other in ways much more powerful than words, and in the end, those demonstrations of love are what gave Brody the strength to allow his family and friends to be part of the anguish he was living.  That was his final step towards acceptance of himself and what his life had become, and gave him the ability to move forward with his love for Alyssa.

The book was well written, the dialog meaningful and the balance of "inner dialog" and actual story was well done. While Make It A Double is the 2nd book in the Last Call series, its a stand-alone book and can be read independently.  However, Brody's twin brother Hunter, who has a recurring role in Make It A Double book, is featured in On the Rocks, the first book in the Last Call series, and I'm sure his story is equally powerful!

Goodreads - Amazon - Barnes and Noble
Posted by Nancy at 8:12 AM