"Against the Sky" by Kat Martin 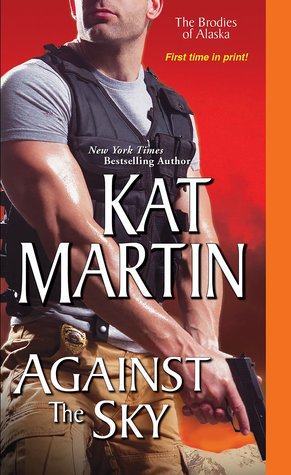 ALASKA
In America's last wilderness, there are no limits to what a man can do.
For detective Nick Brodie, that means keeping the perps off the streets of Anchorage 24/7. Nick has never backed down from danger, but after the horrors he's seen, he's definitely in need of a break.
Samantha Hollis never thought she'd meet anyone like Nick, especially in a place like Las Vegas. But after one reckless, passionate night, she discovers the charismatic stranger is everything she wants in a man. But can he ever be anything more than a one-night stand?
When Nick invites her to Alaska, Samantha decides to find out, never guessing the depths she'll discover in him or the tangle of murder, kidnapping, and danger about to engulf them both.


I struggled with the rating for this book.  I have really enjoyed Kat Martin's previous romantic suspense novels.  I was looking forward to Against the Sky after her previous "Brodies of Alaska" installment.  However, I struggled more with this book.  The writing style and dialog were well done, as always, and that's why I gave Against the Sky 3 1/2 stars instead of 3.  But there were other aspects of this book that I just really didn't like.

Nick.  I really wanted to like Nick.  He began the story as an alpha male, rescuing Samantha from what could be a dangerous situation.  As he and Samantha got to know each other in Vegas, I really grew to like him.  He seemed sensitive, yet still very alpha. But, as soon as Nick got home, and Samantha eventually came to visit, he turned into a cave man that I really didn't like.  His reactions to her announcement, her attempts to brighten his home, and every time she did anything that went against his controlled life were completely offensive to someone he supposedly loved - and Samantha just took it. Every time I thought Nick was going to redeem himself, he again showed his cave-man tendencies and I again didn't like him.

For the most part, I liked Samantha as a character.  When she arrived in Alaska to visit Nick, I didn't like how she handled the conversation she and Nick needed to have.  I liked that she knew who she was and was realistic in her expectations with regards to her relationship with Nick, but I didn't like that she continued to grow and develop her relationship with Nick each time he treated her as though her feelings and her actions didn't matter. I wished she had a bit more backbone in her dealings with Nick.

There were several aspects of the story line that just didn't resonate with me.  The extent to which he "performed like a cop" although he wasn't, yet that was completely allowed by the local police, just didn't seem realistic. And then as things continued to spiral out of control, the extent to which Samantha got involved with her "hacking" skills, which as we know, every good marketing researcher has (insert sarcasm emoji here), just again didn't seem realistic.  It almost felt as though the suspenseful aspects of this story were forced a bit in order to create the drama. There were parts that were realistic but others that just defied the "sniff test".

Because I have read Kat Martin's books before and have been pleased with them, I will likely read subsequent books from her; chalking this one up to just not being one of her better ones.  Because the writing style was enrapturing and the dialog was well done and the story was tightly written, I felt this book deserved a bit higher rating than I would have otherwise given.  The aspects of the story that I disliked or didn't feel realistic contributed to the rating.  Overall, an OK book but not one of Kat Martin's better ones.  I look forward to future books in the series as redeeming my enjoyment of this series.

Goodreads - Amazon - Barnes and Noble
Posted by Nancy at 8:26 AM

Email ThisBlogThis!Share to TwitterShare to FacebookShare to Pinterest
Labels: 3 1/2 stars, Against the Sky, Brodies of Alaska, Kat Martin