"His to Seduce" (Bears of Grizzly Ridge) by Elena Aitken 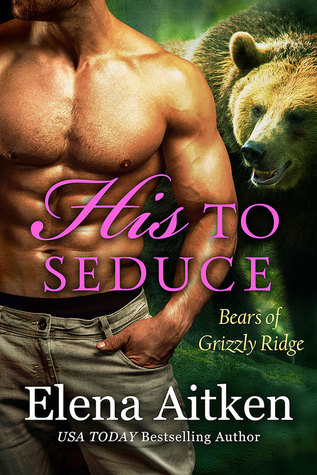 Chloe Karrington has spent her life running from the idea of needing a man, let alone a mate. After all, she’s an independent career woman, a man would only get in the way. Besides, she’s never met anyone who was worth the time.

That is until her work as an environmental researcher takes her to Grizzly Ridge and directly into the path of the way too sexy, way too intense, Luke Jackson. If her instincts have anything to say about it, he is most definitely worth something.

Chloe’s determined to get him out of her system, something that turns out to be a whole lot easier said than actually done. But when she makes a discovery on the Ridge that changes everything and could ruin the Jackson brothers and the Ridge, not only is her professionalism put to the test—so is her heart.

I had never read a shifter story before the first book in Elena Aitken's Bears of Grizzly Ridge series. His to Seduce is the 2nd book in the series and equally compelling. A shifter book makes a promise of an extremely alpha male, and Ms. Aitken doesn't disappoint. Luke is strong and sensitive. While he isn't looking for his mate, he's open to the possibility, especially after seeing how happy his older brother is. Enter Chloe. She's not interested in mating, but everyone at Grizzly Ridge recognizes her for who she is as soon as she arrives. She takes her resistance to an extreme, risking alienating everyone on the Ridge when she does. She also takes her job seriously, affecting her personal life to the point she didn't want anyone else in it. She's a strong character, but there was something just below the surface that bothered me about her. Her overreaction to her discovery on the property was dramatic and a bit overblown-I was just thankful someone could talk her back into a realistic response.

The brotherly interaction was well done, indicative of what happens when you put three alpha-males in the room together. Their fierce protectiveness of their mates, coupled with their sensitive dealings with the women themselves, make them extremely alluring to the reader. The author has teased us with the story of the third brother, making this reader anxious to read how he finds his happily-ever-after.

Email ThisBlogThis!Share to TwitterShare to FacebookShare to Pinterest
Labels: 4 1/2 stars, Bears of Grizzly Ridge, Elena Aitken, His to Seduce