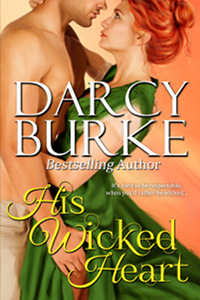 It’s hard to be respectable…
Jasper Sinclair, Earl of Saxton, made a bargain with the devil—his father—to marry in one month's time. But instead of declaring his intentions for an acceptable debutante, he indulges his long-buried baser needs by joining a fighting club and pursuing a delectable woman who may not be what she seems. Soon he finds himself battling addictions that threaten his already wicked heart.
When you’d rather be wicked
Orphaned seamstress Olivia West wants the chance to lead an honest, respectable life, but the arrogant Earl of Saxton launches a daunting campaign to make Olivia his mistress. Destitute and desperate, Olivia agrees to one night with the dangerous peer, and draws upon her mother’s courtesan experience to seduce him. After binding and blindfolding him, she brings him to the edge of release, only to switch places with an actual prostitute. However, Jasper detects Olivia’s deception and vows to claim what he's owed— not his money, her.


In "His Wicked Heart", Darcy Burke provides us a story of a broken man who feels trapped by his station, and his father; and a woman who feels burdened by her poverty and her own troubled childhood. They meet by happenstance - a misunderstanding, actually - and Jasper (Duke of Saxton) is intrigued. Even in their meeting, though, we see the sensitive side of Jasper when he interrupts an aggressive suitor. Jasper is a truly sensitive character and throughout the book, we see him picking up "strays". We didn't spend much time at his home in this book, but I feel certain it's completely staffed with people down on their luck who need a hand up - and Jasper provides it. Jasper is definitely a complicated character, because while we see him trying to change the world, one hard-luck case at a time, we also see how he deals with the tension in his life - through fighting. He spent much of his life on the receiving end of violence, so I find it interesting that his method of dealing with the stress and tension in his life is violently - but controlled violence in the fighting club. But, you never see him display that violence outside of the club unless when warranted (i.e. when he is attacked). He uses his helping of those in need, and his fight club, to soothe the life-long hurts he has experienced. He may seem fierce but I actually think he's very gentle. I know he doesn't expect a woman to ever do more than fill his needs sexually and in society - and he fully expects those needs to be met by different women. Until he meets Olivia and struggles with his feelings for her.

Poor Olivia. I loved her but it is clear that she is trapped in a vicious cycle dictated by her station and her lot in life. She is an honorable woman and works hard to meet her meager needs honorably. Ironically, she meets Jasper when he mistakes her for exactly what she never intends to be - a prostitute. I think he sees her as a challenge - something for him to strive for - but knows that nothing can come of his relationship with her. Olivia is a strong woman - at least as strong as a woman can be in London of the time. But beneath that strength is the 14 year old girl who is still seeking approval from her aunt and uncle, and love from her mother. She finds that love in an unlikely place - a dear old woman who embraces Olivia into her family - and Olivia comes willingly because I think its the first real unconditional love she's felt from another. Olivia also understands her lot in life and even though she is being embraced by Louisa, she doesn't believe this will secure her a place in society. It does, however, secure her the love of a wonderful widow in Louisa, and puts her right in the Jasper's sites - and in his bed. Throughout the book, Olivia struggles with balancing what she knows is proper behavior for a woman of the time with her overwhelming feelings towards Jasper, even as she knows they are wrong. Both Jasper and Olivia struggle to fight their feelings for each other, and what they know to be their duty to their station, and it creates a lot of angst as their relationship develops.

I think what I liked the most about this story is how Jasper, with Louisa's help, finally realizes that he has more power over his destiny than he realizes. Jasper feels trapped by his place in society and it takes Louisa to help him understand that his position in society can be a position of power and not just shackles on his life. Jasper is acting as though his father has all the power, but Louisa helps him see that he can leverage what he knows about his father's desires to achieve his own goals - a life with Olivia. We see a huge turnaround in his father's relationship with Jasper once Jasper turns his position into a position of power. I almost think that his father begrudgingly gains respect for Jasper when Jasper finally stands up for what he wants in life. In the end, we see a great transformation in Jasper as he realizes that happiness and love IS in the cards for him with Olivia, and he finds a way to have the life he wants with her. And she happily joins him in that life!