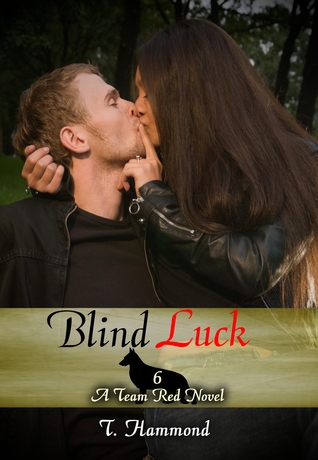 David remains in Spokane at Marcia's bedside, and Bastian is on the East Coast completing PreClan software installations. Both men worry about Teresa as she and Red close in on the vicious gang cutting a bloody swath of terror through the Sierra Mountains.

WARNING: This book is INTENDED FOR MATURE ADULTS OVER 18. Contains graphic sexual content, and swearing, which is unfortunate as the dog repeats everything.


Readers have been waiting with baited breath for the conclusion of the "Team Red" series with the release of Blind Luck, and T. Hammond did not disappoint! "Team Red" is a 6-book serial and while there is a lot of enjoyment in reading each individual book, lots of the nuances of the story and the characters will be missed if the previous books have not been read.

I found myself laughing from the very first chapter. I love how the men that work for the Mustangs, or for Team Red, do a roll call each time Teresa enters the room, since she can't see them. I laughed when I read, "Fritz here - in body only - my brain is still back in my bunk" as part of the roll call! It was then quickly followed by, "I'm not playing your stupid Marco Polo game ... you can smell the sausage cooking, so you already know I'm here." How much fun it must be to live in Teresa's house!

Blind Luck is dialog intense. The nature of the story lends itself to lots of dialog and it makes for a quick read - not because it's short but because the story flows easily and quickly. The author masterfully writes the dialog and the situational descriptions in between in such a way that I felt like I was sitting in the room with the characters as they chatted!

Red continues to steal the show in Blind Luck. Red demonstrates more empathy and emotional awareness towards "his people" than most humans do. He epitomizes what everyone knows that dogs have, and what they wish for from the people in their life - unconditional love! He's sensitive to Teresa's needs, and demonstrates a great deal of emotional awareness of what Wes is going through with his mother's illness. Red's has a sharp wit and his sense of humor is contagious. Even though Teresa is the only one who can hear Red, his personality is such a strong part of the story and it feels as though all of the guys can hear him.

Bastian and Teresa's relationship continues to grow and mature and I fell in love with Bastian all over again in Blind Luck. He is the definition of alpha male with a wonderfully-endearing sensitive side. He loves Teresa with his whole heart and demonstrates his love for her over and over. He understands and the respects the relationship she has with her security detail, especially Frost, but continues to stake his claim whenever one of them tries to get his hackles up - which they often do in jest. Those interactions just add to the humor of the story. Blind Luck is a romance first and foremost but I think Romantic Comedy is definitely an appropriate moniker for Blind Luck. The author ties up the loose ends that had been left from previous books, she expands Teresa's "family" - those that know about her secrets - and gives us the happily ever after we've been waiting for. The author even redeemed David in the eyes of this reader. While I'm sad to see the end of the Team Red series, the author promises future stories around "The Mustangs" and I look forward to checking in with Teresa, Bastian and the others as we revisit Spokane, Washington in the future!

Other Books in the Team Red Series:

Giveaway:
a Rafflecopter giveaway
About the Author: