Release Day Review: "It Had to Be Fate" by Tamra Baumann 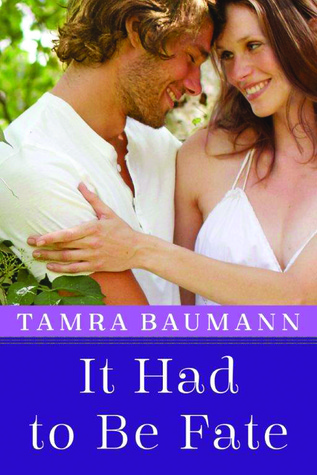 Falling for a bad-boy rock star is the last thing single mother Casey Anderson-Bovier should do. Embroiled in a custody battle with her ex, Casey is fighting to raise her boys in their quaint Colorado hometown—a secret haven for celebrities. But when it comes to her hotel’s newest guest, Casey can’t connect the dots. Is Zane Steele the out-of-control rocker plastered all over the media, or the captivating man with a killer smile who’s charming her and her two boys?

Zane has a good reason for letting the world believe the worst of him—and that’s a secret he’s sure he can never share…until he meets Casey. After years of having fans fall at his feet, he’s found the one woman who brings him to his knees. Casey is beautiful and intriguing—and thoroughly justified in not trusting him one bit, especially with her family at stake. But the only way to be together is to convince her to take a chance on him, on fate, and on their crazy, unexpected love.

Another great Anderson Butte story. The characters are always well-developed and humorous - you just never know what to expect from Grandma, and she doesn't disappoint. I love Casey - she's a fierce mama bear and I love her relationship with her kids. And Tomas is a guy that you love to hate! He was so well written, I wanted to reach into my Kindle and wring his neck. Then there's Zane - your classic hero and he doesn't disappoint. A classic rocker with a heart of gold, taking care of everyone in his life - something that has been drilled into him his entire life and reinforced by his mother on her deathbed. I love Zane and his honor and integrity.

The storyline was realistic and well-paced - I found myself turning the pages faster and faster to keep up with my racing mind. And the tie-ins back to previous books, and hints into future books keep me coming back to this series over and over.

Tamra Baumann is an award-winning author who writes lighthearted contemporary romance. Always a voracious reader, she picked up her first romance novel and was forever hooked. (Thank you, Nora Roberts!)

She lives in the Southwest where the sun shines most every day and the sunsets steal her breath away. She has two kids, both bilingual in English and sarcasm, and a dog who is addicted to Claritin because he’s allergic to grass. Her husband, who gamely tolerates her many book-boyfriends, has been her real-life boyfriend for thirty years. Her debut novel, IT HAD TO BE HIM was published by Montlake Publishing April 1st, 2015, and her second IT HAD TO BE LOVE came out September 8th 2015. Stay tuned for more in 2016.

Tamra is a Golden Heart and Golden Pen Winner.  She is also a member of Land of Enchantment Romance Authors and RWA. Tamra enjoys hearing from you.

Email ThisBlogThis!Share to TwitterShare to FacebookShare to Pinterest
Labels: 5 stars, Anderson Butte, It Had to Be Fate, Tamra Baumann