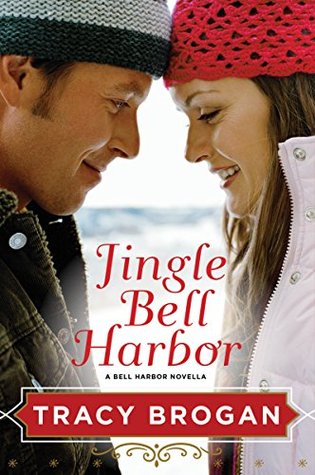 Synopsis:
As assistant buyer for the world’s second-largest Christmas store, Kelsey Parker feels like a holiday harlot. She’s contractually obligated to promote the yuletide season. All. Year. Long. And it’s taking a toll on her spirit. But when her clueless, self-absorbed boyfriend goes on their long-anticipated romantic vacation—without her!—Kelsey is beyond disappointed to find herself tromping through the Bell Harbor snow instead of lounging on a tropical beach.

Drew Hampton is considered quite a catch among the Bell Harbor bachelorettes, but when his high school dream girl, Kelsey Parker, shows up at his grandfather’s Christmas tree lot complaining about her love life, he decides it’s long past time to get her under the mistletoe himself.

As things heat up between the two, a surprise visitor arrives, making Kelsey an offer she can’t quite believe. Now she must decide what matters most, and she just may discover the key to her happiness.

I love the character development the author includes in the book. Kelsey's grandmother is a spitfire who has no filter and definite views on Kelsey's dating (and sex) life. And her friend, Dody, is a piece of work with her "age inappropriate" outfits and her equally inappropriate views on sex. These two characters really add a lot of depth to the story, secondary to the main storyline but important, interesting additions. Even the smarmy boyfriend added a fun element to the story - I think every reader will want to kick him to the curb with Kelsey as you get to know him. I also love how Drew, his father, and grandfather were all called "something" Junior Hampton - Old Junior Hampton, Big Junior Hampton, and Little Junior Hampton. It's little touches like this that really add depth to a story.

The book is written in first person, told from Kelsey's point of view. There are times that the story shifts to Drew's POV, but its often only to get Drew's perspective on what just happened with Kelsey. I would have liked a bit more of Drew's POV to get to know him independently from Kelsey. That was my major concern with this book - the imbalance of POVs learning much more towards Kelsey and most of Drew's POV just being how it relates to Kelsey.

The story is cute. I love Christmas and this book has it in spades. The storyline was tight without a lot of extraneous aspects that made it drag. The story is a bit sensual but the heat level is mild and appropriate for any adult reading audience.

Past or present, Tracy Brogan loves romance. She’s a bestselling author of both contemporary romantic comedies and historical romance, and recently earned the coveted Diamond Award from Amazon Publishing for exceeding one million copies sold.

Her debut novel, CRAZY LITTLE THING, was nominated for a prestigious RITA award by Romance Writers of America® for Best First Book in 2013. It ranked #15 on the Wall Street Journal, and landed at #33 on the Kindle Bestsellers list for 2013. This Bell Harbor novel has gone on to sell more than half a million copies internationally and has been translated into several languages, including French, German, Dutch, and Hebrew.

Her bestselling second book, HIGHLAND SURRENDER, won a Golden Quill and the Book Sellers Best award in 2013. HOLD ON MY HEART released in 2013, followed by two more novels, THE BEST MEDICINE (May, 2014) and LOVE ME SWEET (January, 2015), both set in Bell Harbor. THE BEST MEDICINE landed in the Kindle Top 100 Bestsellers for 2014 and earned Brogan her second RITA nomination in 2015.

Brogan lives in Michigan, the state shaped like a mitten, and is therefore prone to pointing to the palm of her hand when explaining where she’s from. She shares a very messy house with her husband, their above-average children, and two intellectually-challenged dogs. She loves to hear from readers so please email her at tracybrogan@att.net, or visit her on Facebook https://www.facebook.com/AuthorTracyBrogan or Twitter https://twitter.com/tracybrogan.