Book Tour and Giveaway: "That Man of Mine" by Maria Geraci

Enter to win Grand Prize: Vera Bradley Beach Tote and a Second prize for a Signed Print Copy of That Thing You Do 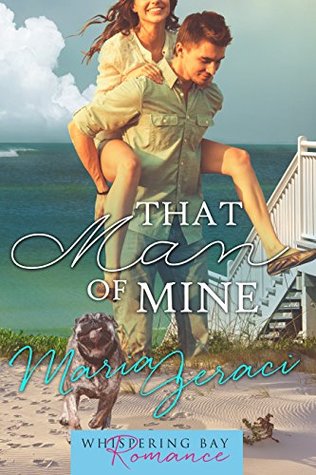 When Mimi Grant becomes mayor of Whispering Bay, she gets a whole lot more than she bargained for. Her biggest concern? The city’s annual festival is in financial ruin and the former housewife doesn’t have a clue how to fix things. But, she’s determined to bring the sleepy beachside town into the twenty-first century.

Hunky Police Chief Zeke Grant isn’t happy that his estranged wife Mimi has just become his boss. But for the town’s sake, he’s willing to swallow his pride and let her order him around—to a point. Everything aside, he doesn’t count on someone from his past coming back to haunt him, forcing him to reevaluate what’s really important.

While Mimi and Zeke continue to butt heads on how to get things done, there’s one thing they can’t help but agree on: their chemistry is hotter than ever. However, when a robbery threatens to derail the annual festival, some of the town’s residents question Mimi and Zeke’s ability to keep Whispering Bay safe—as well as keep their war-torn personal life out of civic business. Mimi and Zeke must team up to solve the crime, and decide once and for all if it’s time to move forward with separate lives, or if true love really does conquer all.

That Man of Mine is a bit of a different kind of love story. Maria Geraci hits it out of the park with the story of Mimi and Zeke, married for 18 years, but on the verge of divorce. The book starts out with a FANTASTIC prologue, written from Mimi's point of view, that sets the stage for the relationship between Mimi and Zeke.

ONCE UPON A TIME there was a seventeen-year-old girl named Mary, who found herself in the family way. (No, not that Mary.) But, there was a similarity in their stories that women of all ages were all too familiar with. Both Marys had gotten inconveniently pregnant. One, by Divine Intervention, and the other…well, let’s just say it was the sex that had been divine.


I really enjoyed that Ms. Geraci writes a story of mature adults with their own family, struggling to keep it together. I think many readers will be able to relate to this story and see aspects of their own marriages in Mimi and Zeke's. How many of us wives feel like our husbands just brush off our problems and feel like they think they'll go away if they just ignore them. And how many husbands feel like they can't win for trying with their wives anymore. It is quite funny in the way Mimi and Zeke's separation is revealed - you typically expect the man to "ignore it until it goes away", but a slight misunderstanding results in Zeke blurting out their separation in a room full of people!!  Eek!

There are many laugh-out-loud aspects of this book, as in previous book in the Whispering Bay series, and most of them revolve around Mimi and Zeke's sex life. They've been married eighteen years and in a few short months, while they are separated, two specific sexual interactions, or relations (as Mimi's mother calls them) make the headlines of the Whispering Bay gossip columns!!

Ultimately, Mimi and Zeke find that compromise, and not right-fighting, is what will lead them back to each other, although they traveled a rough road to get there. I feel this is an incredibly realistic and insightful look into a love story that hasn't quite stood the test of time, but in the end, shows the true resilience of love in a long-standing relationship. Who knew that Mimi and Zeke needed a separation to spice up their sex life and strengthen their marriage - Maria Geraci did!

Giveaway:
a Rafflecopter giveaway
Posted by Nancy at 5:00 AM

Email ThisBlogThis!Share to TwitterShare to FacebookShare to Pinterest
Labels: 4 1/2 stars, Maria Geraci, That Man of Mine, Whispering Bay