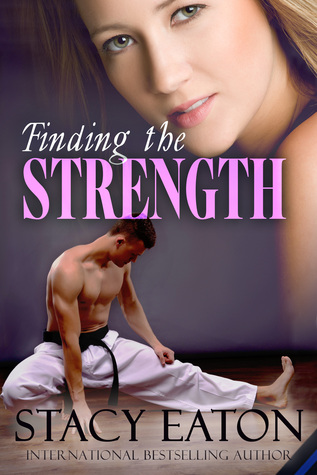 Synopsis:
The night Tayla Adams is attacked, third-degree black belt, Cam Giles steps in and stops the violent man. Little does Tayla know that when she takes a self-defense class, she will come face to face with her knight in shining armor, but can Tayla learn to defend herself and gain enough confidence to protect the two of them when she is unexpectedly betrayed?

Finding the Strength, a novella by Stacy Eaton, tells the story of a woman who lacks confidence in herself and through her experiences, and the love of a good man, finds her inner strength. The title is well suited to the story and defines the journey the heroine in this story takes from a meek woman, easily intimidated by not only real threats, but perceived challenges to herself, to a strong woman who is not only confident in her abilities, but her feelings for a good man. The author writes in first person point of view, alternating between the heroine, Tayla, and the hero, Cam. I always like being able to see how both parts of a relationship view and understand an interaction. Its nice to see the difference in how a man and a woman will perceive the same situation differently - and that is the root of the relationship between Tayla and Cam. The story is well written with a tight storyline that doesn't feel rushed or incomplete. When reading a novella, I often feel the story needs more depth but I didn't in this story. There is a long period of time (I think about 10 months) that was glossed over, and I did wish to see a little more detail about what was happening in that time, but that is not because it was important to the story, but because I wasn't ready for Tayla and Cam's story to end. This novella is well written and a nice, realistic depiction of a woman learning to find her inner strength through martial arts.

Stacy has been a full-time police officer since 2000. Her current assignment is as Detective of her small town department.  She enjoys crime scene investigation; taking a passion in putting the pieces together to figure out the crime. She is also a business owner where she helps people get the awareness out for the causes they care most about. She is a mother of two, a son proudly serving in the United States Navy and a young daughter. Her husband is also in law enforcement. She is very much into photography and carries her Nikon Digital SLR with her almost everywhere, just in case.

Her first book, My Blood Runs Blue was the start of her writing career.  It brings the world of law enforcement into the paranormal world of vampires. It is a suspenseful adult series that will keep you guessing from chapter to chapter. Book one, My Blood Runs Blue, was published April 2011 and is currently available in paperback and e-book editions. Book two of the series, entitled Blue Blood For Life was released September 2011 and like book 1 made International Best Selling lists on Amazon very quickly.  The third and fourth books in the series are projected to be released in 2015.

The fourth novel released by Stacy Eaton was in February of 2013. Garda ~ Welcome to the Realm. Stepping away from the drama of domestic violence and the dark world of the paranormal vampires, Stacy brought to life a new paranormal world, “The Realm”. Here Stacy brought Guardian Angels to life in a unique and positive way.

Her fifth novel, Liveon – No Evil,  is a contemporary romance that was released in November 2013 shortly before she released Second Shield, a more intense and spicy romantic suspense in late November 2013.

Distorted Loyalty was her seventh novel published, and it was released in June 2014 along with Six Day’s of Memories. Both of those are drama filled and romantic suspense.

Stacy had two more novels currently in editing process, You’re Not Alone and Barbara’s Plea. She is also finishing up the re-writes to the first two books of the My Blood Runs Blue Series and writing books 3 and 4 of the series to complete it.

If you are interested in a signed copy of her book?  Send us an e-mail at Stacy@Stacyeaton.com and we can tell you how to get one.