"When Time Comes" by Cat Nicolaou 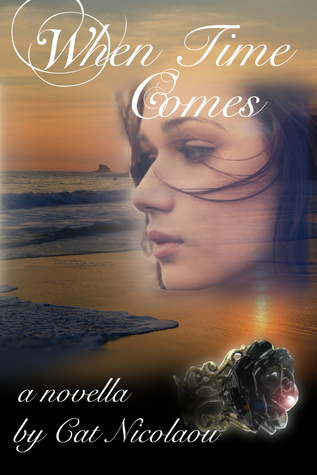 Athena can't avert her eyes. Alex Dane is back in Greece. Her mind wanders in time, six years ago, to the island of Rhodes. Three lustful days with him and a precious gift he left her with. All she needs is a leap of faith, but will he fly? Dare they dream again "When Time Comes"?


This is the first time I have been asked by an author to review a book.  When Time Comes is the first book from author Cat Nicolaou. I read this novella with the knowledge that this was her first publication and she was likely not a native "American English" speaker.  As a matter of fact, I rarely read internationally set or authored books because I typically find that I struggle with the language barriers and terminology.  But, because I was asked, I went into this book with an open mind and truly interested to see what I would find.

For a first novella, this was a pretty good read.  The premise of the book is a woman who meets someone she has idolized for many years and ends up having a brief relationship with him.  While this story could have easily been a "been there, done that" story, it wasn't.  Because it was set in Greece, it put a fresh perspective on this story that I wasn't familiar with. I enjoyed the glimpses I was given of Greece and what life may be like living there.  The writer didn't include a lot of "pop culture" types references which makes this story more timeless rather than "set in the moment".  I also liked that the characters in this story weren't young - the heroine was 34 and the hero was 44. As someone in that age range, it was nice to see a love story that wasn't just about young "twenty-somethings".

When it came to writing style, it felt as though the author was almost "trying too hard". There are times when I read a book that it feels like the author has attempted to mix up the sentence openers and sentence style to ensure it isn't repetitive, and this was one of those times.  The writing style sometimes "tripped me up" but all in all, it didn't hinder my progress and my ability to relate to the story line. The author could have fleshed out the story a bit more in several sections and brought it to a more "complete" end prior to ending the scene rather than leaving the reader with a feeling of "abrupt ending".  I also felt that there were a bit too many "cliches" used.  In some cases, the abruptness of the writing or the use of cliches could be a result of an author who doesn't speak American English as a native and the "translation" into a book for American English readers is difficult.

Despite my feedback regarding the writing style, for a novella length book I felt the story was well thought out, and the story line brought to a realistic conclusion with the right level of emotional investment in the characters.  This novella could really be made fantastic if it were expanded into a full-length novel and some of the details that were otherwise glossed over were included.

Goodreads - Amazon - Smashwords - Barnes and Noble
Posted by Nancy at 9:55 AM