Review: "The Color of Forever" by Julianne MacLean 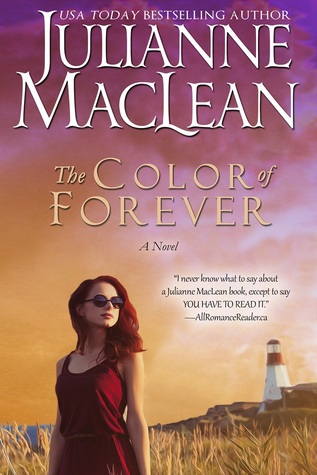 Recently divorced television reporter Katelyn Roberts has stopped believing in relationships that last forever, until a near-death experience during a cycling accident changes everything. When she miraculously survives unscathed, a deeply-buried memory leads her to the quaint, seaside town of Cape Elizabeth, Maine.

There, on the rugged, windswept coast of the Atlantic, she finds herself caught up in the secrets of a historic inn that somehow calls to her from the past. Is it possible that the key to her true destiny lies beneath all that she knows, as she explores the grand mansion and its property? Or that the great love she’s always dreamed about is hidden in the alcoves of its past?

While each novel in the series can be read as a standalone, there are many more books to love in this series!

My Review:
In The Color of Forever, Julianne MacLean weaves a complex, intriguing story. It's difficult to say everything I loved about this book without giving away spoilers, because her stories are so intricately-woven and follow a fascinating route to their conclusion.

The reader "knew of" Katelyn in the previous book - The Color of Time - and I felt myself wanting to read the previous book again to remind me of how her story affected the characters in the previous book before diving into this story. But there was no need, because Katelyn's story is here - or is it. The concept of a person's ability to affect your reality in your dreams in again present in this story, with its own twist.

The Color of Forever shouldn't be started unless you plan time to read it in one sitting, because you won't want to put it down. And like Katelyn, who mourned a life she didn't know she'd missed, I mourned the loss of these characters when The Color of Forever ended. I was fully engrossed in Katelyn's, Aaron's, Jack's, Sebastian's, and Evangeline's story, puzzled along with them as they navigated choppy waters, and missed them now their story is complete.

Katelyn's story ended the way it should have, but my heart hung still in my chest until it did, and my heart broke for the one who lost, although I know he'll find his own happily-ever-after eventually.

This is a clean story with a lot of romance but no explicit details. It makes the reader think about what could have been, and loves past, and makes you wonder if you are leading the life you're meant to be leading. Thought-provoking, emotionally-intense and riveting, Ms. MacLean delivers another 5-star romance in The Color of Forever.

Julianne MacLean is a USA Today bestselling author who has sold more than 1.3 million books in North America alone. Her novels have also been translated into Spanish, German, Portuguese, French, Japanese, Turkish, Russian, and Dutch. She has written twenty historical romance novels, including the bestselling Highlander Trilogy with MacMillan/St. Martin's Press and her popular Pembroke Palace Series with Avon/Harper Collins. She recently turned down a six-figure advance from a major New York publisher in order to self-publish a contemporary mainstream fiction series. The first novel in that series, THE COLOR OF HEAVEN, was a USA Today bestseller in 2013. Julianne is a three-time RITA finalist with Romance Writers of America and has won numerous awards, including the Booksellers' Best Award, the Book Buyers Best Award, and a Reviewers' Choice Award from Romantic Times for Best Regency Historical of 2005. She has a degree in English Literature from the University of King’s College in Halifax, and a degree in Business Administration from Acadia University in Wolfville. She lives in Nova Scotia with her husband and daughter, and is a dedicated member of Romance Writers of Atlantic Canada.

Email ThisBlogThis!Share to TwitterShare to FacebookShare to Pinterest
Labels: 5 stars, Color of Heaven, Julianne MacLean, The Color of Forever