"Bury the Hatchet" by Catherine Gayle 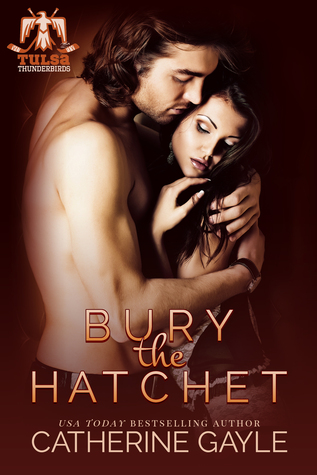 He was poised to be an elite goalie for a contending team.

Hunter Fielding has long since proven himself to be one of the best goaltenders in the NHL. The problem? His former team had another (slightly better) backstop. They left Hunter out to dry, the upstart Tulsa Thunderbirds claimed him in the expansion draft, and he made a few stupid comments about backasswards Oklahomans. Now the T-Birds say the only way he can redeem himself is to make nice for the media with some local goody two shoes who’s made some mistakes of her own.

Tallulah Belle Roth was the reigning Miss Oklahoma USA until a night of out-of-control drinking, a naked foray in a hot tub with very bad boy, and a bunch of lowlights on TMZ. Now she’s been stripped of her crown and is facing the censure of the same people who made her out to be Little Miss Perfect. Tallie won’t ever get her title back, but her life is another matter—and the only way the public will allow her to do that is if she presents herself as happily settled with someone else under Oklahoma’s eye.

The marriage is to be in name only—one year of sickeningly-sweet lovey-dovey PDA, all to get their detractors to bury the hatchet. Those kisses and tender moments for the cameras take an emotional toll, though. Can in name only be enough?

This book started slow for me. As much as I wanted to like it starting out, I just wasn't. The premise seems contrived - two people who have damaged their public reputation will redeem themselves by getting married? You would expect to redeem your reputation by marrying someone with a spotless record, not someone whose public persona is as screwed up as yours. And, woo hoo, for a long time, I really disliked Tallie. She fits the definition of a "sheep" to a "T", not able to make decisions for herself or express her own opinion.  But, that is what her mother and her creepy image consultant Lance have created and she has perfected it. But Tallie really grew on me as the book progressed and she found her voice.

We really get to know Hunter in this book. I like how the author portrays his relationships with Carrie and his brother, and show that beneath all of his anger and disappointment around his brother, there is still a seed of love left. He is an alpha hero who immediately sees the need to protect Tallie, and also to release her from the figurative chains that have bound her her entire life. He does that in spades and throughout the book, you see Tallie emerge as the truly sensitive woman that she is beneath the plucking and the makeup and the airbrushing forced upon her. I enjoyed the character development of Tallie the most and by the end of the book, I found myself reading faster and faster to see how Tallie and Hunter work out.

So, after what I consider a weak start to the book, with characters I struggled to like and relate to as the book begins, as the book progressed it became enthralling to me and an enjoyable read by the end. Despite my struggles with certain aspects of the story, this book is what I would expect from Catherine Gayle and her hockey-based romances and was an enjoyable read!