Review: "The Playboy of Rome" by Jennifer Faye 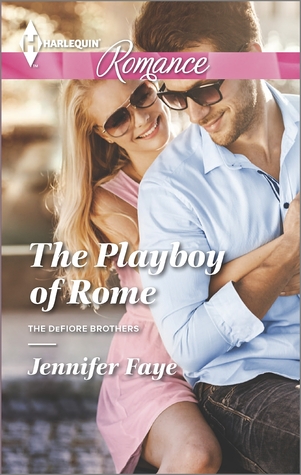 Taming the Italian playboy...
Lizzie Addler's dream of working in Italy is about to come true--that is if she can convince passionate Italian chef Dante DeFiore to keep his side of their bargain. Dante might be hotter than the Italian sun, but he's as cool as ice toward Lizzie.
Dante hasn't the time to pander to Lizzie's dreams of culinary fame--he has a restaurant to run! But as Lizzie proves herself to be a spectacular addition to his kitchen...and to his life. Dante wonders...can he keep her forever?

I typically stay away from books not set in the U.S. because I don't always relate well to the language differences.  But because this book being written by an American, just being set in Rome, I thought I'd give it a shot.  The Playboy of Rome was a sweet story of a girl who is sacrificing herself to support her foster sister.  I liked the premise of the story - girl travels to Rome, boy doesn't expect her, makes assumptions.  Dante and Lizzie had chemistry from the beginning and it permeated their relationship throughout the story. I did find it frustrating that Lizzie continued to believe Dante was a playboy when he had done nothing to earn that reputation while around Lizzie.  Dante's reasons for avoiding commitment were equally compelling and I really felt for Dante as he struggled to fight his feelings for Lizzie because of his belief that he was destined to live alone.  In true Harlequin form, the story was tightly written and well edited.  As expected, Dante and Lizzie faced a situation that threatened their happiness.  I felt the reason for their estrangement was a bit contrived and one or two simple conversations would have solved their miscommunication. All in all, The Playboy of Rome was a sweet read with an expected happily ever after.  Recommend it to anyone who is looking for a quick read with a hero to swoon over!

Disclosure: I won this book in a giveaway through Tasty Book Tours. As far back as I can remember, I’ve had my nose buried in a book. I remember anxiously awaiting Santa to bring me a typewriter in order to write my first book. But before I could reach for my dreams, my life took a detour. I moved around a bit before settling into the position of statistician by day and wife/mother by night. Each new life adventure added fodder for my fertile imagination. Through it all I never lost sight of my dream. When at last I had the opportunity to once again put pen to paper, I couldn’t stop. As an unpublished writer, I’ve gone on to win/final in nearly two dozen contests including Harlequin’s “So You Think You Can Write” Contest (2-time finalist), Finally A Bride (winner), and Linda Howard Award of Excellence (finalist). I currently reside in Pennsylvania with my very patient husband, one amazing daughter (the other remarkable daughter has flown the coop to chase her own dreams) and two spoiled rotten cats. When I’m not glued to my laptop (which isn’t often) or enjoying some family time, I like reading, cross-stitch, embroidery, quilting, knitting, hockey (go Pittsburgh Penguins!), and gardening.